A mollete is a type of bread in Spanish cuisine, or an open-faced sandwich with beans and cheese in Mexican cuisine. 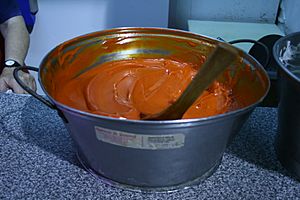 A mollete is a flatbread from the Andalusian region, in southern Spain. It is a soft round white bread, usually served lightly toasted with olive oil and raw garlic or spread with lard (usually in the forms of manteca colorá or zurrapa de lomo) in an Andalusian breakfast. The most famous are the ones from Antequera, Málaga.

A mollete, native to Mexico City, is made with bolillos sliced lengthwise and partially hollowed, filled with refried beans, and topped with cheese and slices of jalapeño or serrano peppers. It is then grilled in an oven until the cheese melts. The refried beans are "frijol mantequilla" (literally, "butter beans") known outside of the region as "pinto beans".

The traditional cheeses used are queso ranchero, asadero, or queso menonita. The queso ranchero is most similar to Parmesan with less aging, the asadero is a creamy provolone, and the menonita most closely resembles Havarti.

Molletes in southern Mexico can be served with salsa or pico de gallo or topped with sliced ham, chorizo, bacon or mushrooms.

There is also a "sweet type" mollete, made of a buttered bolillo sprinkled with sugar or honey and broiled until crisp.

Molletes as a breakfast

Molletes can also be eaten as a simple and inexpensive breakfast.

All content from Kiddle encyclopedia articles (including the article images and facts) can be freely used under Attribution-ShareAlike license, unless stated otherwise. Cite this article:
Mollete Facts for Kids. Kiddle Encyclopedia.