Andalusian cuisine is the cuisine of Andalusia, Spain. Notable dishes include gazpacho, fried fish (often called pescaíto frito in the local vernacular), the jamones of Jabugo, Valle de los Pedroches and Trevélez, and the wines of Jerez, particularly sherry. 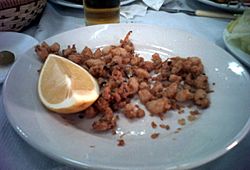 Frying in Andalucian cuisine is dominated by the use of olive oil that is produced in the provinces of Jaén, Córdoba, Seville, and Granada. Málaga, Almería, Cádiz and Huelva produce olive oil too, but in smaller amounts. The foods are dredged in flour a la Andaluza (meaning only flour, without egg or other ingredients, but may include flour from the chickpea especially for use in batters). They are then fried in a large quantity of hot olive oil.

With five coastal provinces, the consumption of fish and shellfish is rather high: white shrimp from the Bay of Cádiz; prawns; murex; anchovies; baby squid; cuttlefish; "bocas de la Isla", a dish found in San Fernando that uses a local crab that can regenerate its claw; flounder; etc. 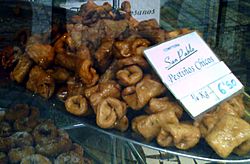 Sugar was first introduced to Andalusia by the Moors around the 10th-century and cultivated in Granada.

The wines of Jerez (also known as sherry) are famous the world over, praised even by William Shakespeare. Other standouts are the manzanilla of Sanlúcar de Barrameda, the white wines of Cádiz, paxarete (a sherry derivative), wines of Condado in Huelva, wines of Montilla-Moriles in Córdoba, wines of Málaga, and la tintilla of Rota. The liquors of the region are also popular, included the anís made in Rute, and in Cazalla de la Sierra, and the rums from the Tropical Coast of Granada (Motril). 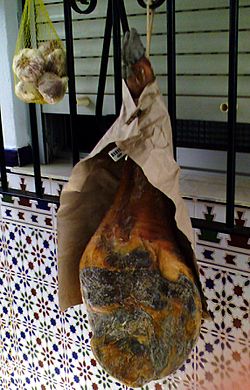 Typical Andalucian dishes include pescaito frito (fried fish), gazpacho, Cordoban salmorejo, pringá, oxtail, jamón ibérico (Iberian ham), prepared olives, alboronía, poleá, anise, and various kinds of wine, including sherries (fino, manzanilla, oloroso, Pedro Ximénez, amontillado) which are undoubtedly the most exported and most widely available of all Spanish wines, as well as Málaga wine. The wine from Montilla, while similar to sherry, is not technically a sherry, but gives its name to amontillado, meaning "in the style of Montilla".

Some other Andalucian dishes include:

All content from Kiddle encyclopedia articles (including the article images and facts) can be freely used under Attribution-ShareAlike license, unless stated otherwise. Cite this article:
Andalusian cuisine Facts for Kids. Kiddle Encyclopedia.