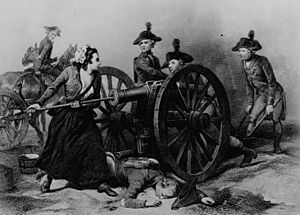 Molly Pitcher at the Battle of Monmouth, an 1859 engraving. Performing as a matross on the gun crew.

Molly Pitcher is a legend from the Revolutionary War. She was bringing pitchers of water to men working a cannon. When one of the men fell down, she fired the cannon herself.

Historians do not think there was a real person named "Molly Pitcher" in the Revolutionary War. Most historians agree it was a nickname. They think the story of Molly Pitcher may have come from more than one real woman who fired a cannon. Many of the battles were fought on hot days, and soldiers would ask for a pitcher of water to drink or to cool the cannons. Molly was a common woman's nickname at the time.

History of the legend

Stories about the American Revolution were first told by talking out loud instead of writing them down. This allowed the storyteller to make things sound bigger than they were or even make up things that did not happen at all. Some stories are still told, long after professional historians prove they are not true.

The story of Molly Pitcher may have come from more than one real person. Many women helped soldiers on the battlefields during the Revolutionary war. Most were wives and daughters of soldiers. According to the legend, "Molly Pitcher" brought water to a group of soldiers firing a cannon during a battle. One of those soldiers was her husband. She brought water many times. When she came to bring water one time, she saw her husband had been shot. Molly took his place and helped fire the cannon. The Battle of Monmouth is probably where the legend started.

Her story was started many years after the war by writers and artists. A Currier and Ives print of a "Captain Molly" appeared in 1848. The first writing about Molly Pitcher was in 1859. It wasn't until 1876 that someone published a genealogy claiming a local woman was the real Molly Pitcher. After that, the idea of Molly Pitcher grew and grew.

Today, Molly Pitcher is famous. She is in grade-school and high-school textbooks. Internet sources even argue whether Molly Pitcher was a feminist.

The Revolutionary war had many small fights and only a few large battles. It was not unusual for women to be fight. Women filled many roles that most people thought were only done by men.

Joseph Plumb Martin was a soldier in the Continental Army. He wrote down of his experiences. This came to the attention of historians in the 1950s. Martin describes a woman at the Battle of Monmouth:

This account has been changed in other sources to show he gave her a name when in fact he did not.

All content from Kiddle encyclopedia articles (including the article images and facts) can be freely used under Attribution-ShareAlike license, unless stated otherwise. Cite this article:
Molly Pitcher Facts for Kids. Kiddle Encyclopedia.