Monk's Dale is a short steep-sided dry gorge near Buxton, Derbyshire, in the Peak District of England. The dale is cut into a plateau of farmland and lies to the east of the village of Wormhill. The head of the valley leads into Peter Dale to the north. Miller's Dale is at the foot of the valley to the south.

The dale is named after monks of Lenton Priory (a Benedictine monastery in Nottingham). During the 12th-century the priory was granted the income from a large area of north Derbyshire by William Peverel. 14th-century carved stones (of the low septum, or stone screen, dividing the chancel from the nave) are all that remains of the monks' grange.

The valley is dry over the summer but has a winterbourne stream which runs into the River Wye at Miller's Dale. 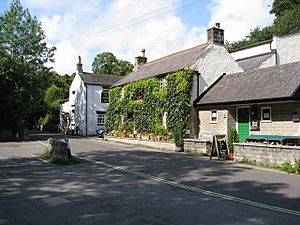 The Anglers Rest at Miller's Dale

There are two Grade II listed buildings at Miller's Dale at the southern end of the valley: The Anglers Rest pub from the 1700s and the Church of St Anne from 1879.

Access into the deep gorge is limited to the entry points at each end. Footpaths from the Wormhill village, from Peter Dale and from the Limestone Way converge at the northern end. At the southern foot of the dale, there is a large car park at Miller's Dale station on the Monsal Trail.

All content from Kiddle encyclopedia articles (including the article images and facts) can be freely used under Attribution-ShareAlike license, unless stated otherwise. Cite this article:
Monk's Dale Facts for Kids. Kiddle Encyclopedia.