Cressbrook Dale (also called Ravensdale) is a dry carboniferous limestone gorge near Bakewell, Derbyshire, in the Peak District of England. The dale is cut into a plateau of farmland and lies to the south east of the village of Litton. Cressbrook village is at the foot of the valley to the south.

The valley is dry over the summer but has a winterbourne stream which runs into the mill pond at Cressbrook Mill and then into the River Wye in Water-cum-Jolly Dale. 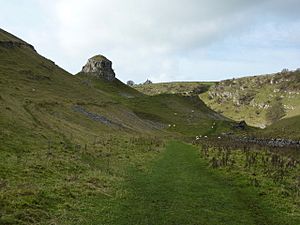 The sequence of limestones in Cressbrook Dale make it an important geological site. The layers were deposited in a warm shallow sea in the Brigantian stage of the Carboniferous period (around 330 million years ago). The Carboniferous Limestone contains important fossils. Several layers of volcanic rock show that volcanoes were once active in Derbyshire.

Peter's Stone (named after its resemblance to the dome shape of St Peter's Basilica in Rome) is the prominent limestone knoll at the northern end of the valley (the Wardlow Mires). It used to be called Gibbet Rock where the last gallows in the county once stood.

High on the cliff above Ravensdale Cottages is Ravencliffe Cave, which is 8 metres (26 ft) deep. In the early 20th century, Stone Age, Bronze Age and Roman artefacts were recovered from the cave including polished stone axes, an arrowhead, pottery fragments, beads and bronze brooches as well as human and animal remains.

Ravensdale Cliff has numerous low- to middle-grade rock climbing routes up to 46 metres (151 ft) long on the main buttress. The cliffs of Water-cum-Jolly (at the foot of Cressbrook Dale) are an accessible and extensive area for climbers with over 400 routes.

The large lead mining area at Tansley Dale, towards the head of the valley, is a protected Scheduled Monument. The visible remains are ruined stone walls and earthworks. Ravensdale Cottages (known locally as 'The Wick') in the middle of the valley are two terraces of lead miners' cottages from 1823. They are Grade II listed buildings. 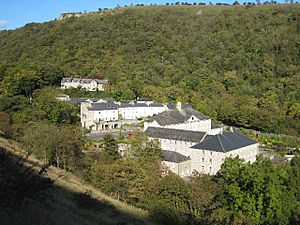 Cressbrook Mill dominates the view at the foot of the valley by the River Wye. The cotton mill was built in 1814–15 by William Newton on behalf on J L Philips. It replaced the original mill built in 1779 by Sir Richard Arkwright, which burnt down in 1785. The clock on the pediment and the octagonal cupola were added in 1837 to commemorate the Queen Victoria's coronation. The mill closed in 1965. It is a Grade II* listed building.

There is an easy-going footpath along the length of the valley floor. The Monsal Trail bridleway runs along the Wye valley at the southern end of Cressbrook Dale. There is access into the dale from both ends, as well as two footpaths from Litton village into the west side of the valley. There is some roadside parking in Upperdale near the southern foot of the dale.

All content from Kiddle encyclopedia articles (including the article images and facts) can be freely used under Attribution-ShareAlike license, unless stated otherwise. Cite this article:
Cressbrook Dale Facts for Kids. Kiddle Encyclopedia.