Montour Falls is a village located in Schuyler County, New York, United States. A population of 1,711 was reported by the US Census of 2010. A waterfall at the end of West Main Street gives the village its name. The name "Montour" is derived from Queen Catharine Montour, a prominent Native American woman of Seneca Indian heritage who lived at the village site in the 18th century.

The modern day Village of Montour Falls is developed on the site of a former Seneca Indian village, Queanettquaga, informally known as Catherine's Town after a prominent Seneca Indian resident and leader, Queen Catharine Montour. Queen Catharine Montour's father (Peter Quebec) was a Mohawk Chief, and her mother (Margaret Montour Hunter) the daughter of an Oneida Chief. She would marry Seneca Indian Chief Thomas Htitson. Queen Catharine Montour's Seneca Tribe was a member of the Iroquois Confederacy. During America's War of Independence reprisals were sanctioned against tribes of the Iroquois Confederacy who had allied themselves with Great Britain. The infamous nearby Battle of Newtown, New York (August 1779) and the march that devastated Queanettquaga (and forty other Amerindian villages of the Finger Lakes) is known as the Sullivan-Clinton Expedition. In addition to burning Queen Catharine Montour's log palace, orchards were cut down, homes destroyed, livestock murdered and cropland salted. Residents of Catharine's Town dispersed to areas as far away as Niagara and Canada. Queen Catharine Montour (b. 1710, died February 20, 1804) is memorialized by a grave mound located on her namesake Catharine Trail within the Montour Falls village limits.

By 1788 the area began to be settled by European Americans. In 1805 the area was known as Mill's Landing after local resident George Mills. (The nearby village of Millport, to current times, is also named for George Mills). 1802 is the earliest date commonly used to mark the beginning of the Montour Falls community — it is the year George Mills was appointed postmaster. It is estimated the community of 1802 consisted of twenty residents – and no stores.

Beginning in 1827 and completed in 1833, the Chemung Canal was built through Mills Landing to connect the Chemung River and its watershed to Seneca Lake. Mills Landing, later Havana, would become commercially significant given its location at the head of navigation on the Seneca Lake inlet. At the north end of the lake, another canal connected to the Erie Canal, leading both to the Great Lakes and to the Hudson River and port of New York City, to increase trade and commerce in the region. The village remained unincorporated until May 13, 1836, when it officially adopted a new name to become Havana, New York. The village of Havana was designated the first county seat of newly formed Schuyler County in 1854. By 1861 the county seat would be moved to Watkins Glen. 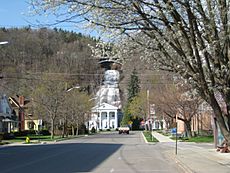 The current name of Montour Falls was adopted for the village on March 20, 1895. The Town of Montour is also named after the 18th-century Native American Seneca tribe matriarch, Catharine Montour.

Charles Cook, businessmen, politician (Canal Commissioner and State Senator), philanthropist and visionary, is credited with the establishment of Schuyler County (1854) and Havana, New York as its first County Seat; the Cook Academy (originally the People's College) began construction in 1858. Today the same facility is home to the New York State Academy of Fire Science. Cook also served as president of the Chemung Canal Trust Bank—the oldest continuously operating bank in the region dating to 1835. On November 20, 1886, a tribute service held at Cook Academy was attended by Governor David Hill and more than 1,000 citizens, associates and admirers of Cook. A bust of Charles Cook was dedicated at the tribute service. Charles Cook never married.

In 1872 two native son engineers of Havana, New York, formed a materials handling company they called Shepard Niles. In 1902 they built their first heavy duty crane and sold it around the world. The company is still in business today. From their web site: "Workhorse cranes and hoists that last virtually forever–this is what industry expects from Shepard Niles. Our custom hand-built, heavy-duty Class D and E cranes and hoists helped America become the world's leading industrial nation, and powered our country through two World Wars." While the company is ongoing, since its acquisition in 1989, its primary operations are no longer domiciled in Montour Falls.

Montour Falls is well known for the natural attraction of a 165-foot waterfall located on the west side of the village. At the base of the falls is a sign labeled "She-qua-ga", a transliteration of its Seneca name. A bridge above the waterfall spells the name as "Che-qua-ga". Many historic names have been recorded under a wide variety of spellings, especially as various peoples tried to transliterate them from one language to another. This attraction is also known as "Montour Falls".

There were 701 households out of which 26.1% had children under the age of 18 living with them, 42.2% were married couples living together, 12.7% had a female householder with no husband present, and 40.1% were non-families. 33.0% of all households were made up of individuals and 20.7% had someone living alone who was 65 years of age or older. The average household size was 2.22 and the average family size was 2.79.

All content from Kiddle encyclopedia articles (including the article images and facts) can be freely used under Attribution-ShareAlike license, unless stated otherwise. Cite this article:
Montour Falls, New York Facts for Kids. Kiddle Encyclopedia.