Mount Constitution is a mountain on Orcas Island, the highest point in the San Juan Islands and the second highest mountain on an ocean island in the contiguous 48 states. Only Devils Peak in the Channel Islands of California is higher. 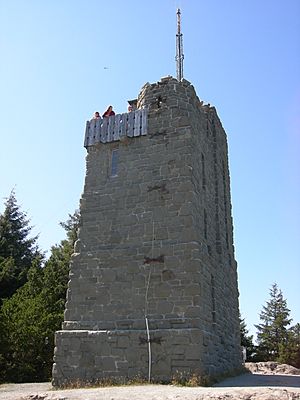 At the top of Mount Constitution sits a 53-foot sandstone tower, reinforced with 2 tons of steel, and measuring 18 x 28 feet at the base.

A stone observation tower patterned after a medieval watch tower stands at the summit. It was designed by architect Ellsworth Storey and built by the Civilian Conservation Corps in 1936. The tower offers panoramic views of the surrounding islands, the Cascade Mountains, and many Canadian and American cities. On a clear day, the view encompasses locations as diverse as Mount Baker, Mount Rainier, Saturna Island, and the cities of Vancouver, and Victoria, British Columbia. Mount Constitution lies within the 5,000-acre (20.2 km2) Moran State Park.

The prominence was named by Charles Wilkes during the Wilkes Expedition of 1838-1842 for the USS Constitution.

All content from Kiddle encyclopedia articles (including the article images and facts) can be freely used under Attribution-ShareAlike license, unless stated otherwise. Cite this article:
Mount Constitution Facts for Kids. Kiddle Encyclopedia.