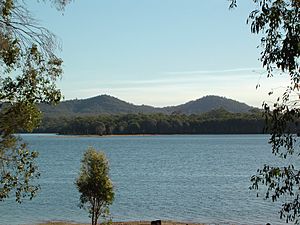 Mount Petrie is a small mountain in the south east of the city of Brisbane. The 170 metre rise sometimes referred to as Petrie Hill, elevates semi-rural residential parts in the suburbs of Mackenzie and Burbank.

The mountain was named after Andrew Petrie Superintendent of Works, Moreton Bay Colony, who climbed it to get his bearings when lost in the bush in the company of the Commandant of Moreton Bay Colony Major Cotton in 1838. It is believed that this was the first climbing of this mountain by white men.

For many years the undeveloped bushland around this hilly area was empty, except for the occasional dirt track. This was partly due to the proximity to the Belmont Rifle Range, around which access is restricted for safety reasons. The bushlands near Mount Petrie are an important habitat for koala, wallaby, and echidna colonies.

A few kilometres east of Mount Petrie is the Leslie Harrison Dam. This places the large hill in the catchment area for Redland City, another reason that development has been curtailed in this part of the city.

The construction of permanent facilities for the Western Corridor Recycled Water Project in 2008 had a significant impact on the bushland on the mountain.

The other two tallest mountains in Brisbane are Mount Coot-tha and Mount Gravatt. The Gateway Motorway passes a few kilometres to the west of the mountain.

On 20 February 1942, a Qantas de Havilland 86 passenger aircraft, VH-USE "Sydney", crashed into the base of Mount Petrie, killing all nine people on board.

All content from Kiddle encyclopedia articles (including the article images and facts) can be freely used under Attribution-ShareAlike license, unless stated otherwise. Cite this article:
Mount Petrie Facts for Kids. Kiddle Encyclopedia.