Other mountains in the D'Aguilar Range include Mount Nebo, Mount Glorious and Mount Mee.

In April 1920 the Upper North Pine Honour Roll was unveiled in the Mount Pleasant School of Arts by Richard Warren, the Member of the Queensland Legislative Assembly for Murrumba. The roll has the names of the 26 World War I servicemen from the Mount Pleasant and Lacey Creek districts; nine of them died in the war. 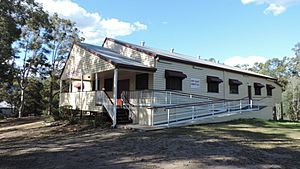 In the 2011 census, Mount Pleasant recorded a population of 304 people, 49% female and 51% male. The median age of the Mount Pleasant population was 37 years, the same as the national median. 86.5% of people living in Mount Pleasant were born in Australia. The other top responses for country of birth were England 6.6%, New Zealand 3%, Canada 1.7%, Belgium 1%. 97.7% of people spoke only English at home.

All content from Kiddle encyclopedia articles (including the article images and facts) can be freely used under Attribution-ShareAlike license, unless stated otherwise. Cite this article:
Mount Pleasant, Queensland (Moreton Bay Region) Facts for Kids. Kiddle Encyclopedia.