Mount Rainier is a city in Prince George's County, Maryland, United States, bordering Washington D.C.. The population was 8,333 at the 2020 census. Mount Rainier is contained between the Northwest Branch Anacostia River, Cedar Lane Alley, and 34th Street to the north, 37th Street and 37th Place to the northeast, Upshur Street and Queens Chapel Road to the west, the Cargo Train tracks to the east, and Eastern Avenue NE to the south. Mount Rainier got its start as a streetcar suburb, when tracks were laid for the 82 Streetcar Line. According to local tradition, surveyors from the Pacific Northwest named the town, giving the streets names such as Shasta and Cascade. Historic U.S. 1 runs through the center of the town and serves as the main street and central business district.

According to the United States Census Bureau, the city has a total area of 0.65 square miles (1.68 km2), all of it land.

There were 3,344 households, of which 30.8% had children under the age of 18 living with them, 25.9% were married couples living together, 18.3% had a female householder with no husband present, 7.7% had a male householder with no wife present, and 48.1% were non-families. 39.4% of all households were made up of individuals, and 5% had someone living alone who was 65 years of age or older. The average household size was 2.41 and the average family size was 3.27.

Located along the Route 1 Corridor, Mount Rainier formed the Gateway Arts District along with its neighboring municipalities of Brentwood Hyattsville and North Brentwood. 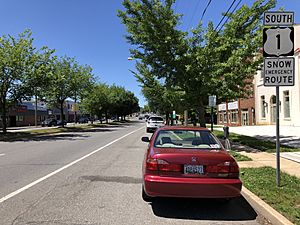 US 1 southbound in Mount Rainier

U.S. 1 is a major north-south roadway running through Mount Rainier, serving as the main street in the downtown area. It leads to College Park and Baltimore to the north and Washington, D.C. to the south. Two other state highways serving Mount Rainier are Maryland Route 500 and Maryland Route 501, both of which skim the northwestern edge of the city.

In 1891, the City of Mount Rainier was named by a group of developers after the famous mountain in the state of Washington.

In 1899, the streetcar lines were extended from Washington D.C. through Hyattsville, Maryland. The Mount Rainier stop was located at the intersection of what is now known as Rhode Island Avenue and 34th Street. It was called the District Line Station. With the stop at Mount Rainier, it was easier to attract developers and prospective buyers because now the city offered easy access to get into and out of Washington.

Houses started to be built near the District Line Station after 1902. The homes on Mount Rainier were considered affordable, ranging from $2000 to $5000.

The business district aggregated around the streetcar station. In addition to the station, there were shops, grocery stores, a barber shop, laundry, and dry good stores. The first post office was established in 1904.

In 1910 the residents in the area around the streetcar station petitioned the Maryland State Legislature to incorporated Mount Rainier, and the city was incorporated by Charter granted on April 14, 1910.

In 1913, the Women's Civic League of Mount Rainier formed. In 1923, the first public school of Mount Rainier was constructed. And in the same year the town hired its first paid police officer because of its growing population.

In 1939, a new terminal was built at 34th St and Rhode Island Ave. because of a change in streetcar services.

In the 1940s, Kaywood Garden apartments were constructed along Eastern Ave., raising the population of Mount Rainier.

In 1952, a library was built. In 1956, a privately operated community pool opened. In 1958, streetcar services stopped and was replaced by bus service.

Today, a large area of Mount Rainier is considered an historic district by the National Register of Historic Places.

In the present day Mount Rainier still has many of the charms and attractive features that it had in the early 1900s. The metro stations at Rhode Island Avenue and West Hyattsville and the sense of community are important factors that draw residents to Mount Rainier.

Mount Rainier has been listed as an historic area, due to its history not only as a primary streetcar suburb of Washington, D.C., but also due to the vast number of Sears houses and Craftsman-style homes, many of which have been restored.

There is a lively arts district in the town, which has made a point to provide affordable housing for artists and to showcase their work. Mount Rainier Day, held in May, is one day in which the entire community opens its doors to the public. The town has become a haven for freelance workers in the world of theater, including scenic designers, artistic directors, lighting designers, and stage directors, several of whom have received the highest DC theater honor, the Helen Hayes Award. Mount Rainier is home to the alternative folk music duo Emma's Revolution and Joe Brewer, lead singer of the rock band [velvet] / owner of Brewer's Arcade which is a museum quality private collection featuring vintage 1980's era classic arcade and pinball machines.

A vegetarian, organic food cooperative, Glut, has existed since the 1960s and draws people from all over the area.

According to some sources, in 1949 at 33rd Street and Bunker Hill Road in Mount Rainier lived a child (see Robbie Mannheim) who allegedly became possessed by the devil. A local priest Edward Hughes took part in the exorcism. This incident became the basis for the movie The Exorcist. Local citizens have no recollection of this child being a resident of Mount Rainier, and a journalist eventually traced the youth to nearby Cottage City, Maryland.

Mount Rainier is a part of the Prince George's County Public Schools system.

Schools that serve Mount Rainier include:

All content from Kiddle encyclopedia articles (including the article images and facts) can be freely used under Attribution-ShareAlike license, unless stated otherwise. Cite this article:
Mount Rainier, Maryland Facts for Kids. Kiddle Encyclopedia.