Northwest Branch Anacostia River is a 21.5-mile-long (34.6 km) free-flowing stream in Montgomery County and Prince George's County, Maryland. It is a tributary of the Anacostia River, which flows to the Potomac River and the Chesapeake Bay.

The headwaters of the Northwest Branch are located near the community of Sandy Spring. The stream flows southward for 21.5 miles (34.6 km) to its confluence with the Northeast Branch near Bladensburg to form the main stem of the Anacostia.

The majority of the Northwest Branch stream valley is a riparian buffer, protected as parkland by the Maryland-National Capital Park and Planning Commission (M-NCPPC). The Rachel Carson Greenway planned by M-NCPPC will extend the Northwest Branch Trail into northern Montgomery County as an unimproved hiking trail, connecting to the Anacostia Tributary Trail System in Prince George's County. 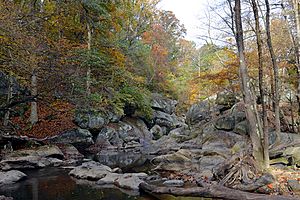 The Northwest Branch at the Fall Line

Northwest Branch crosses the geological fall line between the Piedmont and Atlantic coastal plain regions, which forms a small waterfall on the stream 0.5 miles (0.80 km) south of the Burnt Mills Dam parks. This area was a favorite spot of Theodore Roosevelt.

The total stream channel length of Northwest Branch and all tributaries is 75 miles (121 km).

All content from Kiddle encyclopedia articles (including the article images and facts) can be freely used under Attribution-ShareAlike license, unless stated otherwise. Cite this article:
Northwest Branch Anacostia River Facts for Kids. Kiddle Encyclopedia.