Bladensburg is a town in Prince George's County, Maryland. The population was 9,148 at the 2010 census. Areas in Bladensburg are located within ZIP code 20710. Bladensburg is 8.6 miles (13.8 km) from central Washington.

Originally called Garrison’s Landing, Bladensburg was renamed in honor of Thomas Bladen, governor of Maryland, 1742–1747. Bladensburg was established in 1742 as a regional commercial center by an act of the Maryland General Assembly. The act also authorized the town commissioners to purchase 60 acres (240,000 m2) of land to be laid out in 1-acre (4,000 m2) lots. The act required that a house covering at least 400 square feet (37 m2) of ground with a brick or stone chimney be constructed within 18 months of the sale of the lot. As of 6 June 1746, only 18 of the lots had been improved according to the stipulations of the act. Christopher Lowndes' house, Bostwick, and those built by David Ross and William Hilleary (the William Hilleary House) were among them.

A seaport during the colonial period, Bladensburg is best remembered for the Battle of Bladensburg (1814) during the War of 1812, notable because it was the only battle in American history in which a sitting president (James Madison) rode into battle. America's eventual defeat, called "the greatest disgrace ever dealt to American arms", cleared the way for the burning of Washington by British troops. Its role as a seaport faded as the Anacostia River silted up and larger ships could no longer reach the port.

However, the town remained an important crossroads of routes north to Baltimore and Philadelphia, south and east to the towns of Annapolis and Upper Marlboro, and west to the District of Columbia. The original terminus of the Baltimore and Ohio Railroad was Bladensburg, forcing all passengers intended for Washington to board carriages to continue on into the city. A sharp decline of passengers was experienced in Bladensburg when an extension of the B&O was permitted into the District of Columbia in 1835.

Bladensburg remained a small town throughout the rest of the 19th century with modest development and infrastructure improvements. A major attraction in Bladensburg from the 18th century through the 20th century was the Spa Springs. Thought to be a cure for various illnesses, the springs attracted visitors from throughout the region and was reachable by the Washington, Spa Spring and Gretta Railroad. Another attraction was the Bladensburg Dueling Grounds or Dueling Creek, the site of many famous duels until after the American Civil War. The town was incorporated in 1854. Schools and churches were constructed, including the first Freedmen's Bureau school for African Americans in 1866. The town experienced its most significant growth in the early 20th century with the construction of the first two residential sections of the town in 1914 and 1917. Named Decatur Heights, the subdivisions had gridded streets platted on the north and south sides of Annapolis Road. The town was enlarged again in 1947 by the Sunnybrook subdivision. The mid to late 20th century brought additional residential construction in the form of single-family houses and apartment complexes, as well as the construction of the Bladensburg Shopping Center. After a history major flooding, the Army Corps of Engineers implemented a flood control system around this time that altered the course of the Anacostia River and added levees.

In 1999, Bladensburg, Colmar Manor, and Cottage City were lauded by the Joint Center for Sustainable Communities for their collaboration with Prince George's County for the Port Towns Revitalization Initiative, which created a common Port Towns identity for the towns; encouraged businesses development through infrastructure and façade improvements; acquisition of historic properties and plans for their reuse; and reconstruction of the Bladensburg waterfront and marina.

The following is a partial list of historic sites in Bladensburg identified by the Maryland-National Capital Park and Planning Commission:

International High School at Langley Park: a special high school for students who are new immigrants to the United States. 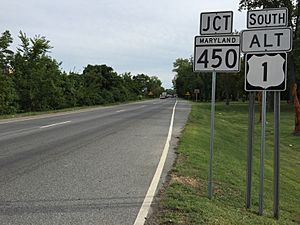 US 1 Alt approaching MD 450 in Bladensburg

Several major surface roads serve Bladensburg. U.S. Route 1 Alternate is the only U.S. Highway serving the town. It follows Baltimore Avenue along a northeast-southwest alignment on the west edge of town. Major state routes serving Bladensburg include Maryland Route 201, which follows Kenilworth Avenue on a general north-south alignment, and Maryland Route 450, which follows Annapolis Road on an east-west route. Maryland Route 202 reaches its northern terminus at MD 450 in Bladensburg, while Maryland Route 769 follows the old alignment of MD 201 along minor surface roads through town. The nearest freeway is the Baltimore-Washington Parkway, which passes just east of the town limits.

All content from Kiddle encyclopedia articles (including the article images and facts) can be freely used under Attribution-ShareAlike license, unless stated otherwise. Cite this article:
Bladensburg, Maryland Facts for Kids. Kiddle Encyclopedia.