Mount Shavano is a high mountain summit in the southern Sawatch Range of the Rocky Mountains of North America. The 14,231-foot (4,338 m) fourteener is located in San Isabel National Forest, 6.5 miles (10.5 km) north by west (bearing 350°) of the community of Maysville in Chaffee County, Colorado, United States. The mountain was named in honor of Ute Chief Shavano.

Mount Shavano lies just east of the Continental Divide and just west of the Arkansas River rising 7,200 feet above the town of Salida in Chaffee County to the southeast. Mount Shavano lies in the south-central part of the Sawatch Range, north of Mount Ouray and Mount Chipeta and south of the Collegiate Peaks (including Mount Princeton, Mount Harvard, and Mount Yale). Mount Shavano is famous for the Angel of Shavano, a snow formation in the image of an angel that emerges on the east face of the mountain during snow melt each spring. 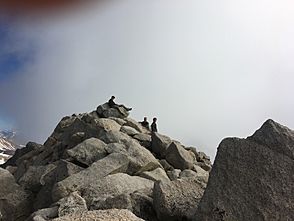 A view of the summit of Mount Shavano during the summer hiking season.

All content from Kiddle encyclopedia articles (including the article images and facts) can be freely used under Attribution-ShareAlike license, unless stated otherwise. Cite this article:
Mount Shavano Facts for Kids. Kiddle Encyclopedia.