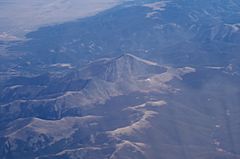 Mount Ouray is a high and prominent mountain summit in the far southern Sawatch Range of the Rocky Mountains of North America. The 13,961-foot (4255.4 m) thirteener is located in San Isabel National Forest, 7.5 miles (12.0 km) west (bearing 270°) of Poncha Pass, Colorado, United States, on the boundary between Chaffee and Saguache counties. The mountain was named in honor of Ute Chief Ouray.

Mount Ouray makes up the southern tip of Sawatch Mountains, rising 7,000 feet above the Arkansas River Valley. Monarch Pass is four miles northwest of the peak.

The standard route is the west ridge. Starting at Marshall Pass, the route heads north along the Continental Divide until the west ridge of Mount Ouray is reached. From there, one can hike east along this ridge up to the summit.

All content from Kiddle encyclopedia articles (including the article images and facts) can be freely used under Attribution-ShareAlike license, unless stated otherwise. Cite this article:
Mount Ouray Facts for Kids. Kiddle Encyclopedia.