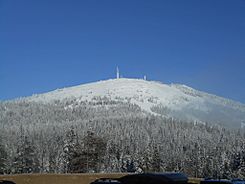 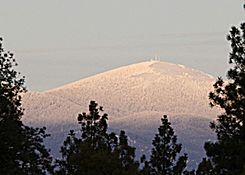 View from southwest in January 2007

Mount Spokane [elevation 5,887 feet (1,794 m)]—known as Mount Baldy until 1912—is a mountain in the northwest United States, located northeast of Spokane, Washington. Its summit is the highest point in Spokane County, and it is one of the tallest peaks in the Inland Northwest. Mount Spokane is surrounded by Mount Spokane State Park, Washington's largest at 13,919 acres (56.3 km2). One of the well-known features is a bald spot on the corner of the west and south parts of the mountain.

Mount Kit Carson—the second highest peak in Spokane County—is located only 1.02 miles (1.64 km) to the east, and with a topographic prominence of only 322 feet (98 m) could be considered a satellite peak of Mount Spokane.

A non-profit organization operates the Mount Spokane Ski and Snowboard Park, located on the southwest portion of the mountain.

All content from Kiddle encyclopedia articles (including the article images and facts) can be freely used under Attribution-ShareAlike license, unless stated otherwise. Cite this article:
Mount Spokane Facts for Kids. Kiddle Encyclopedia.