Mount Stewart is a 19th-century house and garden in County Down, Northern Ireland, owned by the National Trust. Situated on the east shore of Strangford Lough, a few miles outside the town of Newtownards and near Greyabbey, it was the Irish seat of the Vane-Tempest-Stewart family, Marquesses of Londonderry. The house and its contents reflect the history of the Vane-Tempest-Stewart family, who played a leading role in British and Irish social and political life.

Mount Stewart was formed by the Stewart family (later Vane-Tempest-Stewart), holders of the title Marquess of Londonderry since 1816. The family bought the estate in 1744 with money acquired by Alexander Stewart (1699–1781). This new wealth came from the sales of materials like linen. At the time, the house was known as Mount Pleasant.

Alexander Stewart's son, Robert Stewart, became the first Marquess of Londonderry. In about 1800 he added a temporary wing to the west. He died in 1821 leaving the house to his son, also Robert, better known as Viscount Castlereagh, one of Britain's most famous Foreign Secretaries. Castlereagh lived in Mount Stewart during his childhood until he went to University in Cambridge.

Lord Castlereagh inherited his father's title only a year before his own death. The next owner of the house was his half-brother, Charles, 3rd Marquess of Londonderry (1778–1854). He married twice but it was his later marriage which increased the family's finances greatly. His second wife was Lady Frances Anne Vane-Tempest. She was the greatest heiress of her time. This huge new wealth prompted the refurbishment and enlargement of the newly renamed Mount Stewart.

Controversially the Londonderrys, while spending £150,000 on the refurbishment only gave £30 to famine relief in Ireland in the 1840s. This remodelling created the present exterior of Mount Stewart. The small Georgian house and the small portico on the west wing were demolished and the house was increased to eleven bays. On the entrance front, a huge portico was added in the centre, and a smaller 'half portico' was added to the other side.

The marriage also brought in much of the Vane-Tempest property, including land. Wynyard Park, County Durham was redesigned in the Neo-classical style. The couple bought Seaham Hall, also in County Durham, and then later bought Holdernesse House on London's Park Lane. This was later renamed Londonderry House.

The 4th Marquess of Londonderry married the widow of Viscount Powerscourt and lived at her home, Powerscourt, near Dublin. The 5th Marquess lived at his wife's ancestral property, Plas Machynlleth in Wales, and his son, the 6th Marquess, lived at Wynyard. These long periods of neglect nearly destroyed Mount Stewart.

The 7th Marquess (1878–1949), a well-known Ulster Unionist politician, and his wife brought a new lease of life to the house and its plain grounds. The Marchioness of Londonderry's ancestral home was Dunrobin Castle in Scotland and it was that house's gardens which inspired the Mount Stewart's. She also redesigned and redecorated much of the interior, for example, the huge drawing room, smoking room, the Castlereagh Room and many of the guest bedrooms. She named the latter after European cities including Rome and Moscow.

The last chatelaine of the house (and the last surviving child of the 7th Marquess), Lady Mairi Bury (née Vane-Tempest-Stewart, Viscountess Bury), gave the house, and most of its contents to the National Trust in 1977, together with a capital endowment partly funded by the sale in 1977, by Lady Mairi, of Giovanni Bellini's painting "The Madonna and Child with a male Donor, a landscape beyond" which had hung over the altar in the chapel at Mount Stewart (having formerly been at Londonderry House, London) . Lady Mairi was the last Londonderry family member to live full time at Mount Stewart, and the last member of this Anglo-Irish family to live full time in Ireland. She died at Mount Stewart on 18 November 2009, at the age of 88, in the same four poster bed, hung with red silk damask, that she had been born in.

On her death her daughter Lady Rose Lauritzen, wife of the American art historian, became the live-in family member; she lives also in Venice.

The National Trust took over the house and gardens in 1977. The Trust operates the property under the name "Mount Stewart House, Garden & Temple of the Winds".

In 1999, the Mount Stewart Gardens were added to the United Kingdom "Tentative List" of sites for potential nomination as a UNESCO World Heritage Site.

In 2015, the National Trust completed an extensive restoration of the house and its contents as well as the purchase of the wider estate re-uniting it and plan to open for visitor access.

Mount Stewart was in almost permanent use when the 3rd Marquess was alive and was greatly extended to become the principal family residence. It was increased in size greatly with a collection of new rooms which were suitable to house the family's growing art collections, furnishings and general treasures. The main room was (and still is) the 'Drawing Room'. This looks out onto the main gardens and in the past it would have been possible to see Strangford Lough. Another main entertaining room was the 'Dining Room' which looks out onto the entrance front and was almost twice its present size, but was altered to make a new kitchen some time after its construction and lavish decoration. One of the most stunning rooms at Mount Stewart is the private 'Chapel'. This hidden gem is a double-height room with stained glass windows and Italian paintings on its walls. 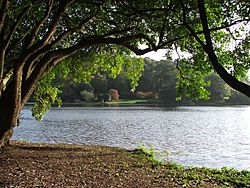 The lake at Mount Stewart

After the house's interior, the Marchioness redesigned the gardens in the most lavish way possible. Prior to her husband's succession to the Marquessate in 1915 the gardens had been plain lawns with large decorative pots. She added the Shamrock Garden, the Sunken Garden, increased the size of the lake, added a Spanish Garden with a small hut, the Italian Garden, the Dodo Terrace with its 'menagerie' of cement animals, the Fountain Pool and laid out walks in the Lily Wood and rest of the estate. In 1957, she gave the gardens to the National Trust. 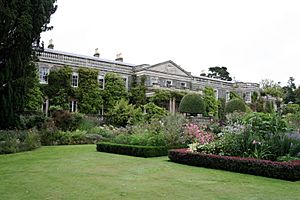 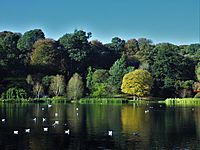 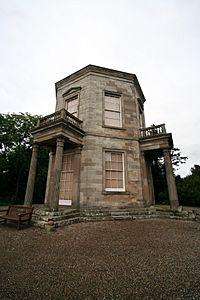 The Temple of the Winds

The present-day estate of Mount Stewart extends to 950 acres (380 ha) with a large lake and many monuments and farm buildings.

Temple of the Winds

The 'Temple of the Winds' is an octagonal building inspired by the Grand Tour the 1st Marquess of Londonderry took in his youth. It was designed by the neoclassical architect James 'Athenian' Stuart in 1782–83.

Many country houses in the UK had adaptations of the 'temples' their owners had seen on their tours of the Mediterranean. The temple is similar to structures at Shugborough and West Wycombe Park, both National Trust properties. The classical model was the Tower of the Winds, a clocktower in Athens which has a frieze depicting the eight wind deities (anemoi) of Greek mythology.

All content from Kiddle encyclopedia articles (including the article images and facts) can be freely used under Attribution-ShareAlike license, unless stated otherwise. Cite this article:
Mount Stewart Facts for Kids. Kiddle Encyclopedia.