For the place in Essex see Mowden, Essex.

Mowden is a large housing estate situated on the northern edge of the West End of Darlington.

Houses here date back to 1960s and they are among some of the most sought after in the town.

Mowden Hall is a Victorian family home designed by Alfred Waterhouse for the Pease family and is located on Staindrop Road. It was one of several homes commissioned by notable Quaker families in Darlington, another example being Polam Hall (now home to Polam Hall School). 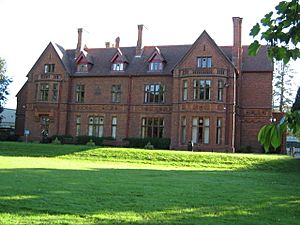 John Beaumont Pease bought the farmland on which Mowden Hall stands during the 1840s and demolished its in 1862. He tried to ensure it was a private site by diverting an ancient footpath to High Coniscliffe out of his sight. After his death, his son Edwin Lucas Pease continued to block the footpath, angering the locals. He had promised to unblock the path but did not and even diverted another footpath. In 1875, a protest was held at the Mechanics Institute, which resulted in councillors, mayors, solicitors and ramblers forming the Darlington Footpaths Preservation Society. This resulted a protracted court battle, which went all the way to the Queen's Bench in London, between Edwin Pease and the Society over the legality of his actions. The court ruled in favour of Pease, who used the monetary award to extend Mowden Hall to the present-day mansion. The Pease family owned the property until the 1920s. Edwin's son William Edwin Pease never married and Mowden Hall was inherited by a cousin Ernest Pease, who sold it in 1927 and moved south to the Isle of Wight due to ill health.

Mowden Hall School was founded there in 1935 but the pupils were forced to evacuate during World War II, eventually moving permanently to its present site in Stocksfield, Northumberland. The property switched hands several times before being sold to the government in 1966. The main tenant has been the Department for Education (and its predecessor agencies) and the Teachers' Pensions Agency. The DfE moved out to its new premises in 2015. The building is now home to Marchbank Free School, a special needs school for children with socio-emotional and behavioural problems.

Nearby areas include Hummersknott to the south, Branksome to the north and Cockerton to the north-east.

All content from Kiddle encyclopedia articles (including the article images and facts) can be freely used under Attribution-ShareAlike license, unless stated otherwise. Cite this article:
Mowden, County Durham Facts for Kids. Kiddle Encyclopedia.