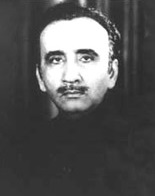 Mohammad Khan Junejo (Urdu: محمد خان جونیجو Sindhi :محمد خان جوڻيجو, August 18, 1932 – March 16, 1993) was the eleventh Prime Minister of Pakistan. He was appointed by the Zia military regime, but later turned against it and tried to improve democracy in Pakistan. For this, he was removed from power by the Pakistan Army.

All content from Kiddle encyclopedia articles (including the article images and facts) can be freely used under Attribution-ShareAlike license, unless stated otherwise. Cite this article:
Muhammad Khan Junejo Facts for Kids. Kiddle Encyclopedia.