Muleshoe is a city in Bailey County, Texas, United States. The town of Muleshoe was founded in 1913 when the Pecos and Northern Texas Railway built an 88-mile (142 km) line from Farwell, Texas to Lubbock through northern Bailey County. In 1926, Muleshoe was incorporated. The population was 5,158 at the 2010 census. The county seat of Bailey County, it is home to the National Mule Memorial.

The Muleshoe Heritage Center located off the combined U.S. Routes 70 and 84 is a popular museum which commemorates the importance of ranching to West Texas. The complex has several unique buildings originally from Bailey County that display the living conditions of the area in the late-19th century and the early to mid-20th century.

The Muleshoe National Wildlife Refuge is located some twenty miles (32 km) to the south on State Highway 214. Founded in 1935, the refuge is the oldest of its kind in the state of Texas. It is a 5,000-acre (20 km2) wintering area for migratory waterfowl flying from Canada to Mexico. It contains the largest number of sandhill cranes in North America.

The name Muleshoe can be traced in the region to Henry Black when he registered a brand on November 12, 1860. In 1877, Black purchased three houses on a 40,000 acres (160 km2) in Stephens County, naming it Muleshoe Ranch. Later he built a large ranch house and a log schoolhouse, and established a small cemetery for family members. Muleshoe Ranch was supposedly named after the owner found a mule shoe in the soil.

On April 23, 1906, the Gulf, Santa Fe and Northwestern Railway Company and the Pecos and Northern Texas Railway Company merged and were chartered to construct a railway between Lubbock, Texas and Farwell, Texas on the New Mexico border. From 1901 to 1915, communities along the future railway contributed hundreds of thousands of dollars to construction. Muleshoe was founded in 1913 when the Pecos and Northern Texas Railway laid rails across northern Bailey county; residents borrowed the name from the nearby Muleshoe Ranch.

Soon after the railroad passed through Muleshoe, the town expanded rapidly. In 1917 Muleshoe became the county seat after the county was organized, but it was not incorporated until 1926. Muleshoe continued to grow quickly, and by 1930 there were 800 residents in the town. Three decades later Muleshoe tripled in population to 3,871. In 1970 Muleshoe reached its pinnacle at over 5,000 residents, 200 businesses, two hospitals, two banks, a library, a newspaper, and a radio station. 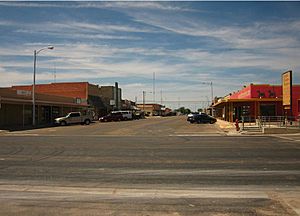 During the 1970s and 1980s the population stagnated, and by the 1990s Muleshoe's population began to decrease. The population went from 5,048 in 1988 to 4,530 in 2000. The once lively and vibrant Main Street is now quiet with many abandoned buildings. Many of the businesses that once called Main Street home are now on American Boulevard (US Highway 84/70).

During the early 1960s Texas residents were eager to build a memorial to the mule for his strength and sparse eating habits, traits which endeared him to the pioneers. In war, the mule carried cannon; in peace, he hauled freight. His small hooves allowed him to scale rocky areas. The Mule Memorial was first displayed on July 4, 1965 near the intersection of US 70/84. Muleshoe is the home of the world's largest mule shoe found at the Muleshoe Heritage Center. 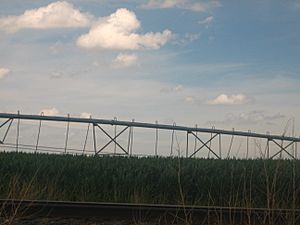 Irrigated fields between Muleshoe and Farwell

Muleshoe is situated on he Great Plains in an area where the plains reach their highest altitude at the foot of the Rocky Mountains known as the High Plains; more specifically it is located on the South Plains in a region known as the Llano Estacado. The area topology is gently rolling plains with a large number of playa lakes on top of a large plateau. Many of the playa lakes have dried out due to the water exploitation of the Ogallala Aquifer that helped supply water to the lakes during dry seasons. Soil types vary from dark brown playa lake silt to iron rich clay to sandy soil; topsoil and subsoil layers vary as well. Most of the area contains a layer of caliche; in some areas there is no topsoil or subsoil revealing the layer of caliche while other places have up to four feet of topsoil or subsoil combined.

Muleshoe lies over the largest aquifer in the United States, the Ogallala Aquifer. The aquifer provides all of the city's water and is essential for the agriculture for the surrounding area. The aquifer is being depleted at an increasing rate over the years; this has triggered many changes in agriculture in efforts to preserve this natural resource.

The physical characteristics of the region makes Muleshoe an ideal place for agriculture. Much of the natural habitat of grasslands and shrubs has been replaced by cash crops and livestock, but a few areas of native fauna (called CRP) are preserved. About 20 miles (32 km) south of Muleshoe there is a system of sink lakes found at the Muleshoe National Wildlife Refuge. The refuge is a wintering area for large numbers of migratory waterfowl and sandhill cranes and preserves much of the native wildlife.

Muleshoe is in an area considered part of the semi-arid steppe climate zone that extends from areas of central Mexico to southern Alberta and Saskatchewan in Canada. The semi-arid steppe classifaction identifies areas that are intermediate between desert zones and humid zones. This West Texas town experiences hot summer days and cool summer nights and cool to warm winter days and harsh cold winter nights. Rainfall is low; the town and vicinity receive less than 18 inches (460 mm) of rainfall annually. High summer temperatures (average July temperature above 90 °F) precipitation moisture is rapidly lost to evaporation. Muleshoe experiences steady, and sometimes intense, winds from the north and west in the Fall and Winter and winds from the south or west in the Spring and Summer. The winds add a considerable wind chill factor in the winter.

Shortgrass prairie, prickly pear cacti and scrub vegetation are the most common flora to be seen around town. Agriculture in the forms of cattle ranching, dairy farming, and wheat and cotton farming are the most prevalent in the area. 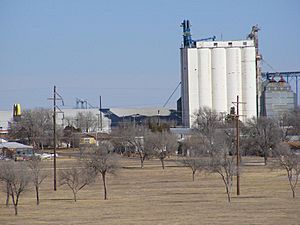 One of the many grain elevators in the area. In the foreground is Muleshoe City Park.

There were 1,595 households out of which 38.6% had children under the age of 18 living with them, 61.3% were married couples living together, 8.8% had a female householder with no husband present, and 26.1% were non-families. 24.1% of all households were made up of individuals and 14.5% had someone living alone who was 65 years of age or older. The average household size was 2.80 and the average family size was 3.35.

In May 2010, Muleshoe opened a water park within the New City Park at 1611 West Avenue D. The facility has a large pool with a lazy river, diving board, and water slide. The park also offers soccer and softball fields, a playground, fishing pond, and basketball courts. City Secretary LeAnn Gallman said that the $1.8 million project originated in 2007, construction began in 2009 and was completed in 2010. The city had a previous 60-year-old pool.

Muleshoe hosts one of the USArray Transportable Array seismic stations as part of the ongoing Earthscope project.

Muleshoe is home to the world's largest mule shoe, measuring 22 feet wide and 17 feet wide. It is also home to the national mule memorial, Ol' Pete, which was invited and attended President George W. Bush's first inauguration in 2001.

All content from Kiddle encyclopedia articles (including the article images and facts) can be freely used under Attribution-ShareAlike license, unless stated otherwise. Cite this article:
Muleshoe, Texas Facts for Kids. Kiddle Encyclopedia.