Multnomah Falls is a waterfall on the Oregon side of the Columbia River Gorge, located east of Troutdale, between Corbett and Dodson, along the Historic Columbia River Highway.

The waterfall formed at the end of a hanging valley created by the Missoula Floods.

The falls drops in two major steps, split into an upper falls of 542 feet (165 m) and a lower falls of 69 feet (21 m), with a gradual 9 foot (3 m) drop in elevation between the two, so the total height of the waterfall is conventionally given as 620 feet (189 m). The two drops are due to a zone of more easily eroded basalt at the base of the upper falls.

Underground springs from Larch Mountain are the year-round source of water for the waterfall, augmented by spring runoff from the mountain's snowpack and rainwater during the other seasons. 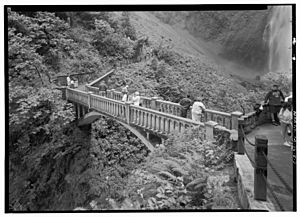 A paved foot trail leads to Benson Footbridge, a 45-foot (14 m)-long footbridge that allows visitors to cross 105 feet (32 m) above the lower cascade. After a viewpoint of the upper falls, the trail continues up many switchbacks to a platform at the top of the upper falls where visitors get a bird's-eye view of the Columbia Gorge and also of "Little Multnomah", a small cascade slightly upstream from the "upper" falls, which is not visible from ground level. The Mark O. Hatfield Memorial Trail starts at the falls and continues through the Oregon side of the Columbia River Gorge to Starvation Creek. The footbridge is named for Simon Benson, who in 1914 financed Italian stonemasons to construct the bridge.

The land and the building

Benson soon gave Portland land that included most of the falls as well as nearby Wahkeena Falls. The Oregon-Washington Railroad and Navigation Company gave Portland land at the base of Multnomah Falls contingent upon their agreement to build a lodge at the site. A few years later architect A.E. Doyle, who designed the Meier & Frank Building, was commissioned by the city to design the lodge, which was completed in 1925. The lodge is now on the National Register of Historic Places. 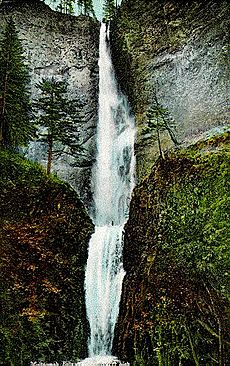 Colorized picture of the waterfall before the footbridge was added

In contrast to other falls along the Gorge, the Multnomah area is also reachable via a stretch of I-84 east of Troutdale, Oregon. The rest area and tunnel under the road (as well as the Union Pacific Railroad tracks) allow Interstate travelers from either direction to stop and visit the falls. During the summer season and holidays the parking lot along the freeway access can fill up very quickly which prompts a gate to come down and a reader board sign along the freeway before the offramp flashes that the parking lot is full.

On Labor Day in September 1995, a 400-ton boulder, loosened by erosion, fell 225 feet (69 m) from the face of the waterfall into the upper cascade pool, above Benson Bridge. It caused a 70-foot (21 m) splash of water and gravel to wash over the footbridge, causing minor injuries to twenty members of a wedding party that happened to be on the bridge posing for photos at the time.

On January 9, 2014, a falling rock damaged a portion of the bridge walkway and concrete railing, leading the Forest Service to close the bridge until repairs were completed.

All content from Kiddle encyclopedia articles (including the article images and facts) can be freely used under Attribution-ShareAlike license, unless stated otherwise. Cite this article:
Multnomah Falls Facts for Kids. Kiddle Encyclopedia.