Mundubbera (/mʌnˈdʌbərə/ mun-DUB-ər-ə) is a town in the Wide Bay–Burnett region of Queensland, Australia. The town is located on the Burnett Highway, 405 kilometres (252 mi) north west of the state capital, Brisbane and 200 kilometres (120 mi) west of the regional centre, Bundaberg. Mundubbera is built on the bank on the Burnett River. At the 2001 census, the town had a population of 1,053.

Mundubbera is the self-proclaimed "Citrus Capital of Queensland", although this is disputed by the neighbouring (and rival) town of Gayndah.

Mundubbera means either Footsteps in the trees or Meeting Place of the waters in the local Aboriginal language. The latter name refers to the confluence of the Burnett, Auburn and Boyne rivers just upstream from Mundubbera.

European settlement took place in the late 1840s. Closer settlement, involving migrants from Germany, Britain and the Netherlands, did not take place until the early 1900s and the town was established in its existing site prior to World War I. The railway arrived in 1914. Mundubbera Post Office opened by 1 July 1912 (a receiving office had been open from 1911). 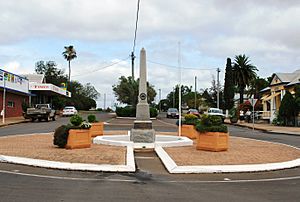 The Mundubbera War Memorial commemorating those from the district who served in World War I was unveiled by the Member of the Queensland Legislative Assembly for Brisbane and Minister for Works, Mick Kirwan, on 27 May 1928.

Henry Zipf planted the first citrus orchards in 1933 and established Mundubbera as a major producer of export citrus. The recent (2006) drought and the after effects of the 2004 Citrus canker outbreak in Emerald has had a dampening effect of the citrus industry in the area. 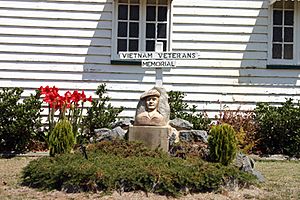 The Mundubbera Vietnam Veterans Memorial commemorates those who served in the Vietnam War. It is located beside the RSL Memorial Hall. 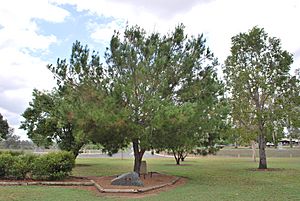 On 11 November 1995, members of the RSL planted a Lone Pine war memorial from a seedling whose lineage links back to Gallipoli.

The Mundubbera district is bounded on the east by the Binjour Plateau and on the south and west by the Burnett River. Devonian, Carboniferous, Triassic, and Post-Triassic sediments have all been found in the district. Devonian and Carboniferous sediments are incorporated into the late or post-Permian folds which affect the Yarrol Basin. A large syncline is exposed, commonly called the Mundubbera Syncline. Folded Triassic strata are found in the western part of the district in a fault block. There is evidence of Tertiary or post-Triassic sediments in horizontal sandstone. Near Riverleigh, fossil corals were found in limestone during the 1920s. These were studied by Dorothy Hill of the University of Queensland.

At the 2001 national census there were 1,053 persons resident in Mundubbera, 6.1 per cent of those of Aboriginal or Torres Strait Islander ancestry. 8.2 per cent of Mundubbera residents were born overseas.

The town is about 1 kilometre (0.62 mi) south of the intersection of the Burnett Highway and the Mundubbera-Durong road. The Burnett Highway links Mundubbera with Gaydah and Goomeri to the east; and Eidsvold, Monto and Biloela to the north. The Mundubbera-Durong links Mundubbera to Dalby and Toowoomba in the Darling Downs. This road is single lane bitumen in places. Public transport is limited. In 2005 the only public transport servicing Mundubbera had was a bus service operating once a week on Thursdays to Bundaberg and on Wednesdays and Fridays to Maryborough. An active rail link from Mundubbera to Maryborough and the coast was maintained with the line no longer having a passenger service, however in 2012 Campbell Newman, the Queensland Premier, announced that the line would no longer be looked after. 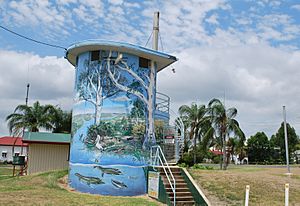 The 360-degree mural showing the joining of the three rivers at Mundubbera.

While Mundubbera attracts seasonal workers from around the world, tourism remains relatively undeveloped. Some attractions include: 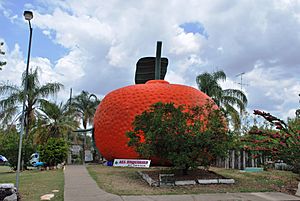 All content from Kiddle encyclopedia articles (including the article images and facts) can be freely used under Attribution-ShareAlike license, unless stated otherwise. Cite this article:
Mundubbera Facts for Kids. Kiddle Encyclopedia.