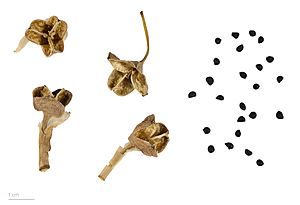 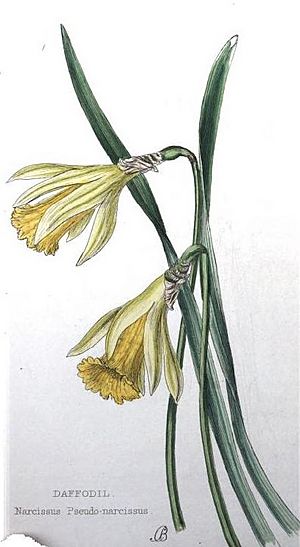 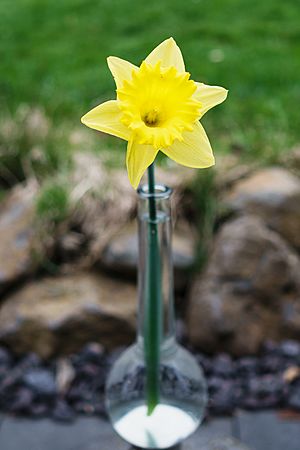 This species has pale yellow tepals, with a darker central trumpet. The long, narrow leaves are slightly greyish green in colour and rise from the base of the stem. The plant grows from a bulb. The flowers produce seeds, which when germinated, take five to seven years to produce a flowering plant. (Sexual [seed] reproduction mixes the traits of both parent flowers, so if garden hybrid cultivars are planted close to wild populations of Narcissus pseudonarcissus, there is a danger that the new seedlings, having hybrid vigour, could out-compete the wild plants.)

The species is native to Western Europe from Spain and Portugal east to Germany and north to England and Wales. It is commonly grown in gardens and populations have become established in the Balkans, Australia, New Zealand, the Caucasus, Madeira, British Columbia, Ontario, Newfoundland, Nova Scotia, Oregon, Washington state, much of eastern United States, and the Falkland Islands. Wild plants grow in woods, grassland and on rocky ground. In Britain native populations have decreased substantially since the 19th century due to intensification of agriculture, clearance of woodland and uprooting of the bulbs for use in gardens. In Germany it was a subject of a national awareness campaign for the protection of wildflowers in 1981.

The history of N. pseudonarcissus has generated a large number of synonyms, including:

There are a number of subspecies of the wild daffodil but the exact number varies according to different authors. The large number of cultivars adds to the difficulty of classification. Among the subspecies is the Tenby daffodil (N. pseudonarcissus ssp. obvallaris, sometimes classed as a separate species), which probably originated in cultivation but now grows wild in southwest Wales. Many of the subspecies listed below are currently considered as species by the Royal Horticultural Society, the International Cultivar Registration Authority for daffodils. Those marked agm are recipients of the RHS Award of Garden Merit.

Narcissus pseudonarcissus ssp. pseudonarcissus itself has eight varieties (described by H.W. Pugsley in an article in the Journal of the Royal Horticultural Society of 1933), including var. festinus, var. humilis, var. insignis, var. minoriformis, var. montinus, var. platylobus and var. porrigens. The eighth variety described by Pugsley, var. pisanus, was further defined by A. Fernandes in the Daffodil and Tulip Year Book of 1968.

Recent research in Wales, southwest England and northern France by keen horticulturists has discovered a small number of remarkably distinct, double-flowered specimens of N. pseudonarcissus growing among wild or naturalised populations of normal N. pseudonarcissus. Such rare forms were known to exist as long ago as the late 16th and early 17th century by botanists and herbalists such as John Gerard and John Parkinson, who variously described them as "Pseudonarcissus Anglicus flore pleno", "Gerrards double Daffodill" and later "The English Double Daffodil". Bulbs have been collected with the landowners' permission and it is hoped that some of these unusual cultivars may become commercially available in the future.

Like all Narcissus species, daffodils contain the alkaloid poison lycorine, mostly in the bulb, but also in the leaves. Because of this, daffodil bulbs and leaves should never be eaten.

All content from Kiddle encyclopedia articles (including the article images and facts) can be freely used under Attribution-ShareAlike license, unless stated otherwise. Cite this article:
Narcissus pseudonarcissus Facts for Kids. Kiddle Encyclopedia.