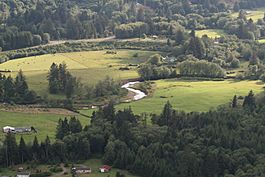 Naselle is a census-designated place (CDP) in Pacific County, Washington, United States. The population was 419 at the 2010 census. Though very near Columbia River's estuary, the valley's Naselle River flows west into nearby Willapa Bay and then into the Pacific Ocean. Close about the town lie the evergreen-covered Willapa Hills. The river's name has been spelled Nasel and Nasal. An early settler along the river called it the Kenebec. The name comes from the Nisal Indians, a Chinookan tribe formerly residing on the river.

There were 160 households out of which 31.3% had children under the age of 18 living with them, 59.4% were married couples living together, 6.3% had a female householder with no husband present, and 31.3% were non-families. 25.0% of all households were made up of individuals and 17.5% had someone living alone who was 65 years of age or older. The average household size was 2.36 and the average family size was 2.85.

The community first flourished as a logging town, and logging remains the dominant private industry. Settled primarily by Finnish and Scandinavian immigrants, the community has maintained this cultural heritage despite a declining percentage of traditional family names. Since 1982, Naselle has hosted a "Finnish-American Folk Festival" every other year, and in 2006 co-hosted, with the nearby city of Astoria, OR, the national festival FinnFest USA.

Jennifer L. Holm's Newbery Honor-winning novel Our Only May Amelia is set in pioneer Naselle, then spelled "Nasel", and is based on Holm family documents of life as a Finnish-American frontier family.

Past and present residents of note include Oscar Wirkkala, logger and inventor; Wilho Saari, kantele performer and teacher and Rex Ziak historian.

All content from Kiddle encyclopedia articles (including the article images and facts) can be freely used under Attribution-ShareAlike license, unless stated otherwise. Cite this article:
Naselle, Washington Facts for Kids. Kiddle Encyclopedia.