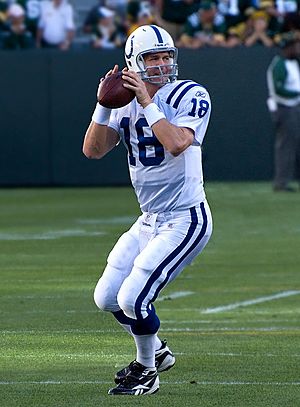 The National Football League Most Valuable Player Award is an award by different entities, most notably the Associated Press, to the player who is thought to be the most valuable player in the league.

As awarded by United Press International

As awarded by the Associated Press

As awarded by the Pro Football Writers of America

As awarded by Newspaper Enterprise Association

All content from Kiddle encyclopedia articles (including the article images and facts) can be freely used under Attribution-ShareAlike license, unless stated otherwise. Cite this article:
National Football League Most Valuable Player Award Facts for Kids. Kiddle Encyclopedia.