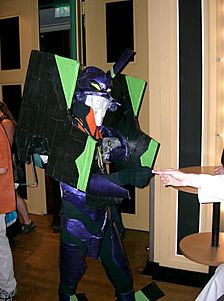 A person cosplaying as Evangelion Unit 01, one of the main staples of the series.

Neon Genesis Evangelion (Japanese: 新世紀エヴァンゲリオン Hepburn: Shin Seiki Evangelion) is a Japanese anime series directed by Hideaki Anno, and produced by Gainax and Tatsunoko Production. It is set 15 years after a world-wide disaster. The main characters are teenagers that pilot giant robots called "Evangelions" to fight giant monsters called "angels". The imagery is inspired by Christianity and Judaism, depression, and philosophy. The show was liked by critics, but the ending made many fans angry. The film End of Evangelion was released in 1997, acts as a different version of the show's ending. Other related media, including several manga, soundtracks, and the Rebuild of Evangelion film series.

All content from Kiddle encyclopedia articles (including the article images and facts) can be freely used under Attribution-ShareAlike license, unless stated otherwise. Cite this article:
Neon Genesis Evangelion Facts for Kids. Kiddle Encyclopedia.