Established as South Stanhope by workers employed as miners in Stanhope, the name "Netcong" was adopted for the community in 1889 when a post office used the name. Netcong was incorporated as a borough by an act of the New Jersey Legislature on October 23, 1894, from portions of both Mount Olive Township and Roxbury Township, based on the results of a referendum held the previous day.

Netcong received its name from the Musconetcong River, named by the Lenape Native Americans and meaning "grass creek", "swamp stream", "rapid stream" or "clear stream place". Along with the river, the proximity of the old Morris and Sussex Turnpike, which passed through the region shortly after 1801, and the coming of the Morris Canal, in 1831, made the site a favorable one for development.

After becoming a borough, the residents had to elect the first governing body. The first Mayor was Abraham J. Drake, elected November 14, 1894. A census of Netcong taken July 1895 showed a population of 877 people.

Netcong derived much of its business from the Delaware, Lackawanna and Western Railroad, which had its last stop in Morris County in the heart of the Borough. The DL&W's Sussex Branch to Branchville also stopped at Netcong Station, with the Sussex Branch coming into the opposite side of the station from where NJ Transit's line is today. The big railroad roundhouse in Port Morris also supplied many jobs for the town residents.

In 1968, AT&T announced that the company would be building a two-story building in the borough at the bottom of a hole 47 feet (14 m) underground. The facility, designed to connect a cable running between Boston and Miami, was designed to withstand a nuclear attack and continue 24-hour operations for as long as three weeks using supplies and generating capacity on the site.

Netcong borders the municipalities of Mount Olive Township and Roxbury Township; and Stanhope in Sussex County.

There were 1,381 households out of which 23.5% had children under the age of 18 living with them, 41.7% were married couples living together, 11.9% had a female householder with no husband present, and 41.3% were non-families. 32.7% of all households were made up of individuals, and 9.4% had someone living alone who was 65 years of age or older. The average household size was 2.34 and the average family size was 2.99. 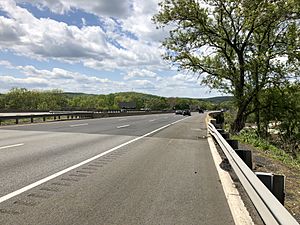 Several major highways pass through Netcong, leading to the borough's motto of "All Roads Lead to Netcong". Major roadways in Netcong include Interstate 80 (the Bergen-Passaic Expressway), U.S. Route 46 and Route 183, the latter two highways meeting at the Netcong Circle. The New Jersey Department of Transportation (NJDOT) uses Netcong as a control city on directional signage on its highways throughout northern New Jersey, and as far away as the George Washington Bridge, even though less than one-tenth of a mile of Interstate 80 is in the borough (from mile markers 26.33 to 26.42). Interstate 80 and U.S. Route 206 intersect with U.S. Route 46 in the southwest corner of the borough at Exit 26.

In 2007, the New Jersey Department of Transportation proposed the elimination of the Netcong Traffic Circle, located at the intersections of U.S. Route 46 and Route 183 just north of the interchange with Interstate 80, and its replacement with a signalized intersection. The circle itself dated back to construction in 1938 and was unable to handle the 17,000 vehicles a year that used the large roadway daily. The circle was the frequent site of vehicular accidents, including a total of 81 in 2007 and 2008. The project had issues dealing with the vertical clearance of the overpass for U.S. Route 46 westbound. The removal of the circle would eliminate this bridge, and the land would go to use as the new signalized intersection, with pedestrian and bicycle fittings. The entire project cost about $13.3 million of state and local funds to construct. A temporary interchange was implemented in January 2013, with the permanent intersection configuration completed that August. 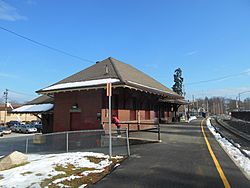 NJ Transit operates weekday rail service at the Netcong station to Hoboken Terminal, with service to Penn Station in New York City via Midtown Direct on the Montclair-Boonton Line and the Morristown Line.

In view of Netcong's rich railroad history, the borough has been named as a site for the New Jersey State Railroad and Transportation Museum (jointly with Phillipsburg). Given that the site envisioned for this museum in Phillipsburg has been sold for development as a townhouse complex and college campus annex, it is unclear what role Phillipsburg will play in this museum. Funding will need to be secured in order to build and operate this museum.

Netcong is home to the Netcong School District, which serves public school students in pre-kindergarten through eighth grade at Netcong Elementary School. As of the 2018–19 school year, the district, comprised of one school, had an enrollment of 289 students and 26.0 classroom teachers (on an FTE basis), for a student–teacher ratio of 11.1:1.

For ninth through twelfth grades, public school students attend Lenape Valley Regional High School, which serves students from Netcong and from the Sussex County communities of Byram Township and Stanhope. As of the 2018–19 school year, the high school had an enrollment of 691 students and 58.0 classroom teachers (on an FTE basis), for a student–teacher ratio of 11.9:1. Seats on the high school district's nine-member board of education are allocated based on the populations of the constituent municipalities, with two seats assigned to Netcong. Netcong residents previously attended Netcong High School. The school closed in 1974 and the building became Netcong Elementary School.

St. Michael School is a Catholic school operated under the auspices of the Roman Catholic Diocese of Paterson, that was founded in 1923, and staffed by the Sisters of Christian Charity of Mendham starting in 1945. The school merged with 4 other elementary schools, moved to the campus at Pope John XXIII Regional High School in Sparta, NJ, and closed at the end of the school year in June, 2016.

People who were born in, residents of, or otherwise closely associated with Netcong include:

All content from Kiddle encyclopedia articles (including the article images and facts) can be freely used under Attribution-ShareAlike license, unless stated otherwise. Cite this article:
Netcong, New Jersey Facts for Kids. Kiddle Encyclopedia.