Nether Providence Township is a first class township in Delaware County, Pennsylvania, United States. Many residents refer to the township by the name of its largest community, Wallingford, because the Wallingford postal code is used for most of the township. The population of the township was 13,706 at the 2010 census.

According to the United States Census Bureau, the township has a total area of 4.7 square miles (12.2 km2), of which 0.01 square miles (0.02 km2), or 0.17%, is water. Crum Creek forms the eastern boundary of the township, and Ridley Creek forms the western and southern border. Nether Providence's commercial area or downtown is located on Providence Road between the bridge over SEPTA's R3/Media Elwyn line and Wallingford Avenue. Interstate 476 runs up the east side of the township near Crum Creek, with access from Exit 3 (Baltimore Pike).

The first recorded inhabitants of Nether Providence Township were Native Americans of the Lenape tribe, who lived in the area for about five hundred years, but by 1740 few remained. On August 14, 1682, two months before William Penn's landing in Chester, John Sharpless came to the area. Penn had given Sharpless a thousand-acre (4-km²) tract, and he settled near Ridley Creek. 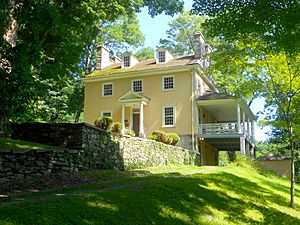 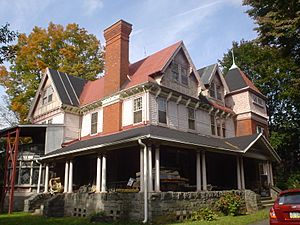 West Lawn, listed on the NRHP

Nether Providence went through four distinct phases from farming, to manufacturing, to resort, and finally, to residential community. By 1729, the area was producing sufficient crops to allow exporting to New England, Canada, and Europe.

Fourteen major mill complexes were built in Nether Providence, six on Crum Creek and eight on Ridley Creek. The first, a cotton mill along Crum Creek, was started by Thomas Allen in 1763. He named his mill for his hometown, Wallingford, England. The mills played an essential part in the growth of Nether Providence. Millhands lived in the self-contained villages that grew up around the mills.

After the Civil War, wealthy Philadelphians built summer residences and vacation resorts in the area. 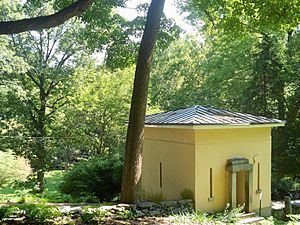 The first railway was the Leiper Railroad, a horse-drawn quarry rail line, constructed in 1809–1810 and used to haul cut stone until about 1828. That early rail line was superseded by the Leiper Canal. The first steam-locomotive train came through in 1854; it used a single track with a sidetrack at Wallingford. The first post office in Nether Providence was established at Hinkson's Corner in 1873. Trolleys also contributed to the area's development. The first independent trolley was the Chester and Media Electric Railway, chartered in 1892. The last trolley through the township closed in 1938. The Nether Providence Police Department was established in 1935, and automobile parking was regulated in 1947 and speed in 1949.

Three sites within the township, Wolley Stille, the Thomas Leiper Estate, and Westlawn are listed on the National Register of Historic Places. 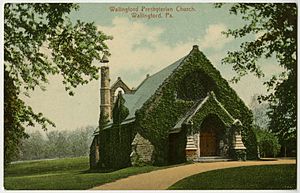 Wallingford Presbyterian on an old postcard 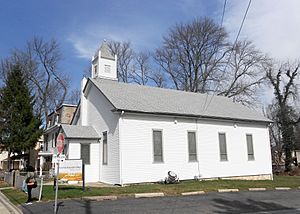 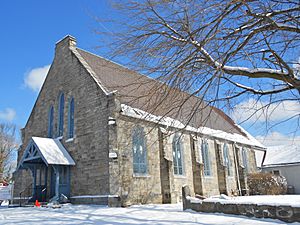 Holy Trinity is a Lutheran church located approximately at the intersection of Harvey Road and route 252.

Congregation Ohev Ohev Shalom is a synagogue located on route 320 approximately at the junction with route 252.

St. John Chrysostom is a Roman Catholic church on route 252 across from Springhaven Country Club.

Wallingford Presbyterian Church is a Presbyterian church located at the intersection of Brookhaven Road and Avondale Road.

Formerly occupied by Zion African Methodist Episcopal, the church building was occupied by the Greater Philadelphia Church in 2015. It is located in South Media at the intersection of Manchester Ave. and Wallingford Ave.

The historic Lieper church is located on Fairview Road in Ridley. In 2015 it became home to Holy Myrrh Bearers Ukrainian Catholic church.

Pine Ridge is a neighborhood of detached houses north of Baltimore Pike. Streets in Pine Ridge are Hemlock Road, Beechwood Road and Pine Ridge Road. Pine Ridge is zoned to go to Swarthmore-Rutledge School even though it is in Nether Providence Township.

The township's only parochial school is the Mother of Providence Regional Catholic School, located in the southern part of the township, in Wallingford. It formed in 2012 from a merger of St. John Chrysostom in Wallingford and Nativity BVM School in Media. Originally Nativity BVM was to be the location of the merged school, but St. John Chrystosom appealed and the archdiocese changed its decision. Notre Dame Catholic Girls High School was formerly in Moylan. In 1981 it closed.

The township is also serviced by the Helen Kate Furness Free Library.

It is a part of SEPTA. Train stations in the township include: Moylan–Rose Valley, and Wallingford.

All content from Kiddle encyclopedia articles (including the article images and facts) can be freely used under Attribution-ShareAlike license, unless stated otherwise. Cite this article:
Nether Providence Township, Delaware County, Pennsylvania Facts for Kids. Kiddle Encyclopedia.