New Baltimore incorporated as a village in 1867 and as a city in 1931. It is located on the north coastline of Lake St. Clair, along the boundary line of Macomb and St. Clair Counties. The town sits on the waterfront along Lake St. Clair's Anchor Bay, and offers a public park, beach, and downtown-shopping district.

German explorer Pierre Yax (b.1763) in Grosse Pointe, New France (now Michigan) was the first recorded non-Native American in the New Baltimore area. Pierre Yax was a son of Johan Michael Jacks, the first German in what would eventually become the state of Michigan. Pierre Yax arrived in New Baltimore in 1796 and subsequently obtained a land grant signed by President John Quincy Adams on July 23, 1826. The land grant tracked back to a land patent Yax had in 1812, when Michigan was still part of the Michigan Territory.

Later, other French settlers came to this area and took residence along the waterfront and rivers. They developed farms that had narrow frontage of 400 of 900 feet and extended inland from the water. Generally, the depth of the parcel was determined by how far a man could plow or cultivate in a day.

The first evidence of a settled community came in 1845, when a Mount Clemens businessman, Alfred Ashley, platted 60 acres (24 ha) of land lying on both sides of Washington Street. This would become known as the village of Ashley. On September 20, 1851, a post office called Ashleyville was established with Ashley as postmaster. Ashley also opened businesses in lumbering, shipping, and real estate. The original village of Ashley occupied what is now the center part of downtown New Baltimore, extending northwest along Clay, Base and Maria Streets from Anchor Bay. The land was subdivided in the typical gridiron fashion used in most American communities at that time. Over the years, irregularities developed in the gridiron subdivision pattern because of the lack of local controls, conflicts with French claims, and changing land uses, particularly along the waterfront area. This created problems in both subdivision patterns in general and waterfront use in particular that remain today. This original settlement bore Ashley’s name until 1867, when the village name was changed to New Baltimore.

Throughout its history, New Baltimore has been linked to the regional economy by virtue of the city’s access to the waterfront and the region’s transportation network. In its early years, New Baltimore took advantage of its waterfront location to operate port facilities exporting agriculture and manufacturing products to other communities. The area was known for the manufacturing of barrels, brooms, bricks, coffins, corsets, and creamery products. Lumber products and building materials were shipped by boat from the local mills. Development was heavily oriented to the waterfront, where shipping piers extended a hundred or more feet into the lake.

As automobile transportation increased in importance and travel patterns changed, so did the development of the city. Goods were no longer shipped by water and the waterfront slowly changed. Between 1860 and 1880, New Baltimore changed from a strong manufacturing and exporting community to a thriving community in Macomb County with many resort activities and well-known commercial establishments. The community was a popular getaway spot for Metro Detroiters and boasted an opera house, hotels, salt baths (which nearby city of Mount Clemens was famous for in the late 19th and early 20th centuries), summer and winter recreational activities, saloons, a brewery and numerous resort and commercial establishments. The city was in the path of a steam locomotive line that ran between Detroit and Port Huron in the late 19th century. As technology changed, the city constructed an electricity plant to accommodate inter-urban passenger trains, which lasted until the mid-1920s. Today, access to the city is provided via Interstate 94. The historic New Baltimore water tower was demolished in the summer of 2015. 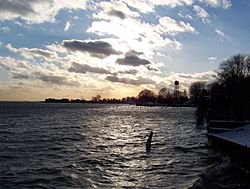 There were 4,434 households, of which 41.3% had children under the age of 18 living with them, 60.0% were married couples living together, 8.2% had a female householder with no husband present, 3.6% had a male householder with no wife present, and 28.1% were non-families. 23.3% of all households were made up of individuals, and 9.1% had someone living alone who was 65 years of age or older. The average household size was 2.72 and the average family size was 3.25.

All content from Kiddle encyclopedia articles (including the article images and facts) can be freely used under Attribution-ShareAlike license, unless stated otherwise. Cite this article:
New Baltimore, Michigan Facts for Kids. Kiddle Encyclopedia.