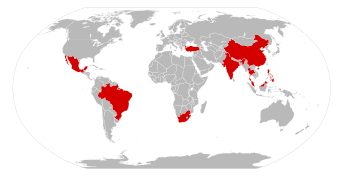 Newly industrialized countries as of 2010.

Newly industrialized countries shown in blue. Rest of the developing countries are shown in green (2014).

The term newly industrialized country (NIC) is a socioeconomic classification used by political scientists and economists to talk about several countries around the world.

NICs are countries who still are not developed countries but are doing better than other developing countries. NICs have fast growing economies, and export a lot. In NICs many things in the country change quickly as people from the country move to the cities to take jobs in factories.

NICs often receive support from international organizations such as the WTO and other internationl support bodies. However, as environmental, labor and social standards tend to be significantly weaker in NICs, many fair trade supporters have advocated standards for importing their products and criticized the outsourcing of jobs to NICs.

All content from Kiddle encyclopedia articles (including the article images and facts) can be freely used under Attribution-ShareAlike license, unless stated otherwise. Cite this article:
Newly industrialized country Facts for Kids. Kiddle Encyclopedia.