Newlyn lies on the shore of Mount's Bay and forms a small conurbation with the neighbouring town of Penzance. It is part of the Penzance civil parish. The principal industry is fishing, although there are also a variety of yachts and pleasure boats in the harbour, as Newlyn has become a popular holiday destination with pubs and restaurants. Although the parish is now listed under Penzance there is an electoral ward in separate existence called Newlyn and Mousehole. The population as of the 2011 census was 4,432.

The settlement is recorded as Nulyn in 1279 and as Lulyn in 1290, and the name is thought to be derived from the Cornish for "pool for a fleet of boats" which is thought to refer to the shallows offshore known as Gwavas Lake, traditionally the principal mooring for the fishing fleet in the area.

Before the rise of Newlyn as an important settlement the landing rights and most property within the Newlyn area were owned by the Manor of Alverton. Newlyn's history has been strongly linked to its role as a major fishing port. The natural protection afforded by the Gwavas Lake (an area of seawater in Mount's Bay) led to many local fishermen using this area as a preferred landing site.

Before the 19th century, "Newlyn" referred only to the area near the old quay. The part of the village that now contains the fish market was known as "Streetanowan", this was separated at high tide from "Newlyn Town" the site of the lower part of the modern harbour being reclaimed land and formerly a beach. In fact Newlyn comprises three discrete hamlets all previously separated by bodies of water, being Tolcarne (Tal Carn: Brow of the Rocks), Street-an-Nowan (Steet-an-Awan: River Street) and Trewarveneth (Farm/Manor on the Hill).

Newlyn (like Mousehole) was part of the ancient parish of Paul. It was common for villagers to climb the relatively steep route from "Newlyn Cliff" to Paul via the area which is now known as Gwavas to worship at Paul Church. Until the mid-20th century an ancient stone cross was present on this route at "Park an Grouse" (The Field of the Cross), this cross was one site of veneration of the Cornish sea deity Bucca, (others were the beaches of Newlyn and Mousehole) the name 'Bucca' has often been used as a nickname for people who reside in Newlyn: the location of the cross is now unknown. 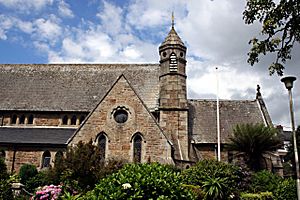 In 1851 Newlyn became the separate ecclesiastical parish of Newlyn St Peter. The church of St Peter was built in the Early English style in 1859-66. The interior is embellished with various works of art including the altarpiece and a statue of the Madonna and Child. "The ensemble is an outstanding example of Anglo-Catholic embellishment of the period [1936-55]" (Peter Beacham). There is a Cornish cross by the road near the churchyard; it was found at Trereiffe about 1870 and much later placed near the church by the Rev. W. L. Lach-Szyrma.

The Spanish Raid of 1595 destroyed Penzance, Mousehole and Paul as well as Newlyn.

In 1620 the Mayflower stopped off at Newlyn old quay to take on water. A plaque on the quay reads:

In 1755, the Lisbon earthquake caused a tsunami to strike the Cornish coast more than 600 miles (970 km) away from the epicentre. The sea rose ten feet in ten minutes at Newlyn, and ebbed at the same rate. The 19th century French writer, Arnold Boscowitz, claimed that "great loss of life and property occurred upon the coasts of Cornwall".

Newlyn and the Cornish language

Newlyn, along with nearby Mousehole and Paul, was the last stronghold of the Cornish language, presumably due to the strength of its fishing fleet. William Gwavas, James Jenkins, Nicholas Boson, Thomas Boson, John Boson, John Keigwin, and John Kelynack Jnr had roots in or strong links with the district. Subsequently, several antiquarians including Prince Louis Lucien Bonaparte, Daines Barrington, Georg Sauerwein and Henry Jenner who all collected Cornish writings or sayings, and the latter two became proficient in its use.

In the 1880s a number of artists flocked to the town and formed an artists' colony. The painters of Newlyn came to be known as the Newlyn School.

In 1896 Newlyn was the scene of the Newlyn riots following protests over the landing of fish on a Sunday by fishermen from the North of England, the local Cornish fishermen being members of the Methodist church and as such strong supporters of sabbatarianism. 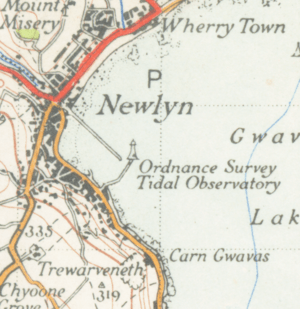 A map of the town from 1946 showing the tidal observatory

In 1915, the Ordnance Survey tidal observatory was established in the harbour and for the next six years measurements of tidal height were taken every 15 minutes.

In 1937, the fishing vessel Rosebud sailed to London to deliver a petition to the Minister of Health on behalf of those villagers whose homes were threatened under the government's slum clearance scheme.

During the Second World War Newlyn was a base for the Air Sea Rescue craft covering the Western Approaches. The harbour was bombed during the war, hitting the collier Greenhithe, which was beached in the harbour at the time and supplied coal to the east coast drifters, which travelled to Newlyn during the mackerel fishing season between the wars. Reporting the event on the "Germany Calling" propaganda broadcast Lord Haw-Haw announced that the Luftwaffe had sunk a British cruiser in Newlyn Harbour.

In 2014 indie band the Hit Parade released Cornish Pop Songs, an album containing several songs about Newlyn including "Rainy Day in Newlyn" and "The Ghost of the Fishing Fleet".

In 1894 Newlyn became part of Paul Urban District. The urban district was abolished in 1934 and Newlyn was absorbed into the municipal borough of Penzance. Penzance Municipal Borough was itself abolished in 1974 under the Local Government Act 1972, and Newlyn became part of the new Penwith District. The former borough was unparished until 1980. The unparished area was formed into a civil parish in 1980, and the new Penzance parish council elected to call itself a town council. Newlyn returns five councillors to Penzance Town Council. Penwith District was abolished in 2009, and Newlyn now falls under the unitary Cornwall Council.

Newlyn is located in western Cornwall, just south of Penzance. It lies along the B3315 road which connects it to Land's End. Paul and Mousehole lie to the south.

The Ordnance Survey, the United Kingdom's mapping agency, bases all elevations including mapped contour lines and spot heights on the mean sea level at Newlyn (see Ordnance Datum). The mean sea level data was calculated from hourly readings of the sea level between 1 May 1915 and 30 April 1921. 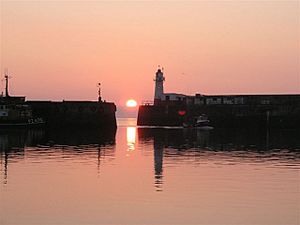 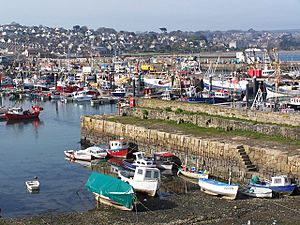 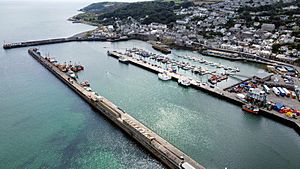 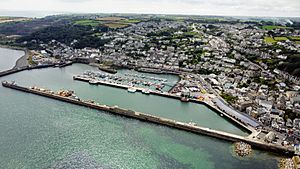 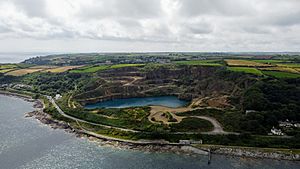 Newlyn's economy is largely dependent on its harbour and the associated fishing industry; Newlyn Harbour is the largest fishing port in England. The port was a major catcher of pilchard until the 1960s. Today, a few vessels have resumed pilchard fishing and use a modern version of the ring net. The largest vessels are beam trawlers owned by W Stevenson and Sons Ltd, one of Cornwall's largest fish producers; most of the other vessels are owned by their skippers. The company based in the Old Pilchard Works today are major supplies of Cornish sardines and mixed-species fish. The fishing industry is hard work and markets are seasonably variable; Lamorna Ash experienced it for herself.

Newlyn RFC was formed in 1894 (or 1895) by the curate of St Peter's Church, the Rev Fred Peel Yates. The club amalgamated with Penzance RFC in 1944 to form Penzance and Newlyn RFC (The Pirates), currently known as the Cornish Pirates.

Newlyn Non-Athletico FC was formed in 1990 by a group of friends playing on Sunday mornings. They initially played in the West Penwith League, before joining the Mining League in 2002 and the Trelawny League in 2011. The club is nicknamed 'The Crab Army' due to Newlyn's fishing links, as well as the red crab featured on the club crest. The club plays its home games at Penzance Leisure Centre. The ground is affectionately known as 'The Santa Clara Stadium', or 'The Aquarium'.

All content from Kiddle encyclopedia articles (including the article images and facts) can be freely used under Attribution-ShareAlike license, unless stated otherwise. Cite this article:
Newlyn Facts for Kids. Kiddle Encyclopedia.