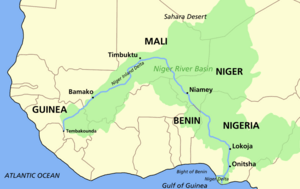 The Niger Basin Authority is an intergovernmental organisation in West Africa. They manage and develop the resources of the basin of the Niger River. The group is called by both French and English acronyms, NBA or ABN.

The organisation was founded in 1964 as the River Niger Commission. On 21 November 1980, it was refounded as the Niger Basin Authority. 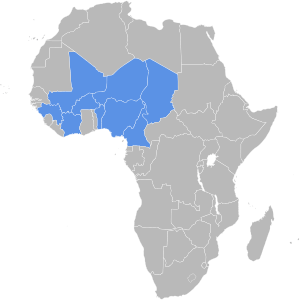 Nine nations are members: Benin, Burkina Faso, Cameroon, Chad, Côte d'Ivoire, Guinea, Mali, Niger and Nigeria. While a small area of Algeria is in the Niger Basin, it is not a member of the NBA. The organisation is based in Niamey. They work in both French and English.

All content from Kiddle encyclopedia articles (including the article images and facts) can be freely used under Attribution-ShareAlike license, unless stated otherwise. Cite this article:
Niger Basin Authority Facts for Kids. Kiddle Encyclopedia.