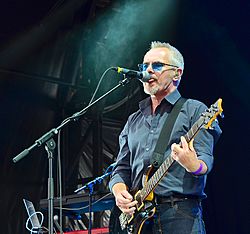 Nicholas David Kershaw (born 1 March 1958) is a British singer-songwriter, composer, musician and record producer. He became more known to the public in the mid-1980s as a pop and new wave solo artist. He has released eight studio albums. His eight singles that entered the Top 40 charts in the UK during the 1980s were "Wouldn't It Be Good", "Dancing Girls", "I Won't Let the Sun Go Down on Me", "Human Racing", "The Riddle", "Wide Boy", "Don Quixote" and "When a Heart Beats". He spent 62 weeks on the UK Singles Chart between 1984 and 1985, more than any other artist.

Kershaw was born in Bristol. He grew up in Ipswich, Suffolk. He was married to Canadian musician Sheri Hamill from 1983 until their divorce in 2003. The couple have three children. He later remarried, and has a daughter with his second wife, Sarah.

All content from Kiddle encyclopedia articles (including the article images and facts) can be freely used under Attribution-ShareAlike license, unless stated otherwise. Cite this article:
Nik Kershaw Facts for Kids. Kiddle Encyclopedia.