Nolan County is a county located in the west central region of the U.S. state of Texas. As of the 2010 census, its population was 15,216. Its county seat is Sweetwater. The county was created in 1876 and organized in 1881. It is named for Philip Nolan, one of the first American traders to visit Texas.

Susan King has been since 2007 the Republican state representative from Nolan as well as Jones and Taylor counties.

From 1921 to 1925, the Democrat Richard M. Chitwood of Sweetwater, represented Nolan County in the state House. As chairman of the House Education Committee, he worked in 1923 to establish what became Texas Tech University in Lubbock. He had first tried to obtain the institution for Sweetwater as the central location of West Texas. After the institution was established, he resigned from the House to move to Lubbock to become the first Texas Tech business manager. He served in that capacity for just fifteen months; he died in Dallas in November 1926. 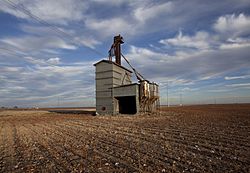 All content from Kiddle encyclopedia articles (including the article images and facts) can be freely used under Attribution-ShareAlike license, unless stated otherwise. Cite this article:
Nolan County, Texas Facts for Kids. Kiddle Encyclopedia.