The town is named after the Brentwood estate built in 1817 by Robert Brent in Northeast Washington, D.C. The town was originally settled by African-American veterans of the American Civil War, who purchased lots from their former commander, Capt. Wallace A. Bartlett, beginning in 1887.

The town was developed beginning in the 1890s around the Highland Station of the Washington Branch of the B & O Railroad and the Columbia and Maryland Railway. "Brentwood" was created by Wallace A. Bartlett, a Civil War veteran, former foreman for the Government Printing Office, Patent Office examiner, and inventor originally from Warsaw, New York. Captain Bartlett lived in Washington, D.C., until 1887, when he purchased 206 acres (0.83 km2) of farmland from Benjamin Holliday, which abutted the Highland subdivision. Bartlett built a farmhouse for his family on the land and, with two partners J. Lee Adams and Samuel J. Mills, formed the Holladay Land and Improvement Company.

In 1891, the Company platted a residential subdivision called "Holladay Company's Addition to Highland" on 80 acres (320,000 m2) of the Bartlett Farm. The lots were approximately 40 feet (12 m) by 100 feet (30 m) and were arranged around an irregular grid of streets. The lots in the northern part of the subdivision, which eventually would become North Brentwood, were smaller and were subject to flooding from a mill race. The first lots in the northern section were purchased in 1891 by Henry Randall, an African-American man from Anne Arundel County, who built a house on Holladay Avenue (now Rhode Island Avenue). In 1894, Randall's son, Peter Randall, constructed a house next to his father's. More family members moved into the community and built homes, and the area soon became known as Randallstown.

Other African-American families soon moved to the neighborhood, including the Plummer, Wallace, and Johnson families. They built two-story front-gable frame houses, as well as free-standing rowhouses. In 1898, the City and Suburban Railway was completed through Randallstown. By 1904 that name had been replaced by Brentwood. In the early 1900s, the development of Randallstown out-paced development in the southern areas also platted by Bartlett. A school and a church were built in 1904, and the Brentwood Colored Citizens Association was formed in 1907. The association helped acquire volunteers for a fire company, fire-fighting equipment, a community hall, and electric lights. After Bartlett's neighboring development was incorporated as the town of Brentwood in 1922, Jeremiah Hawkins pushed for the incorporation of North Brentwood.

In April 1924, Delegate Charles B. Ager sponsored a bill to incorporate North Brentwood. The bill proposed an mayor, three council members, and a treasurer, all popularly elected. The bill passed the House of Delegates. The bill was put up to a vote of the proposed town's residents on June 12, 1924, and it passed.

At the time of its incorporation, North Brentwood was the first municipality in Maryland, and possibly the United States, without any white voters.

Hawkins, Randall, Allen, Wheeler, and Gilmore were all elected as the town's first elected government.

The town continued to grow after incorporation. In September 1924, the town's first school, a three-room schoolhouse, was built.

During the 1930s and 1940s, new homes were built, mostly bungalows and brick Cape Cod houses. New streets were laid out, while the existing streets were paved, extended, and renamed.

The following is a list of historic sites in North Brentwood identified by the Maryland-National Capital Park and Planning Commission. Much of the community is located within the North Brentwood Historic District; listed on the National Register of Historic Places in 2003.

According to the United States Census Bureau, the town has a total area of 0.10 square miles (0.26 km2), all of it land.

There were 167 households, of which 39.5% had children under the age of 18 living with them, 38.3% were married couples living together, 26.3% had a female householder with no husband present, 9.0% had a male householder with no wife present, and 26.3% were non-families. 21.0% of all households were made up of individuals, and 6.6% had someone living alone who was 65 years of age or older. The average household size was 3.10 and the average family size was 3.49.

Located along the Route 1 Corridor, North Brentwood formed the Gateway Arts District along with its neighboring municipalities of Brentwood, Hyattsville, and Mount Rainier.

North Brentwood is home to the Prince George's African-American Museum and Cultural Center.

During the era of legally-required racial segregation of schools, black students from North Brentwood attended Lakeland High School in College Park in the period 1928–1950; Fairmont Heights High School, then near Fairmount Heights, replaced Lakeland High and served black students only from 1950 to 1964; around 1964 legally-required racial segregation of schools ended. 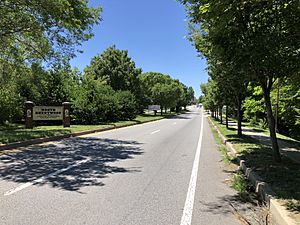 The only highway serving North Brentwood is U.S. Route 1. US 1 connects southward to Brentwood, Mount Rainier and Washington, D.C., while to the north, it passes through Hyattsville and College Park before intersecting Interstate 95/Interstate 495 (the Capital Beltway).

All content from Kiddle encyclopedia articles (including the article images and facts) can be freely used under Attribution-ShareAlike license, unless stated otherwise. Cite this article:
North Brentwood, Maryland Facts for Kids. Kiddle Encyclopedia.