Australian masked owls from Cape York Peninsula have been separated as the subspecies T. n. galei by some authors, however some authorities include this population with T. n. kimberli. The central Queensland subspecies T. n. mackayi (Mathews 1912) may also considered to be synonymous with T. n. kimberli. The Action Plan for Australian Birds 2020 treats Tyto novaehollandiae kimberli as separate from the Cape York and wet tropics race T. n. galei, however the relationship between these subspecies requires further investigation. 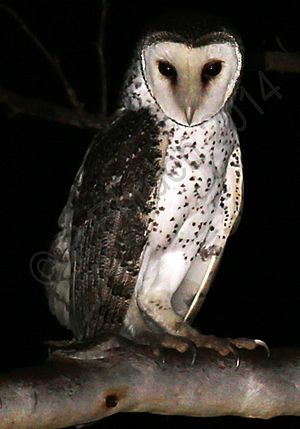 The northern masked owl is uncommon and widely dispersed across broad areas of northern Australia, with the main areas of distribution including the north-west Kimberley region of Western Australia, the northern section of the Northern Territory between the Victoria River and eastern Arnhemland, and Groote Eylandt in the east. Significant populations occur in the north-west of the Kimberley, the Northern Territory mainland between Victoria River and Kakadu National Park, Garig Gunak Barlu National Park (Coburg Peninsula) and Groote Eylandt. Island populations are known from Augustus and Koolan Islands in the Kimberley region of Western Australia and Groote Eylandt, Akwamburkba (Winchelsea Island) and North Goulburn Islands in the Northern Territory. The historical distribution extended to the Borroloola region in the eastern Northern Territory, but the veracity of these records is undetermined. Several early historical specimens labelled from this region are held in museum collections but recent surveys in the Borroloola area and at Pungalina Station failed to detect northern masked owls. In 2019 and 2020 there were confirmed northern masked owl records from Groote Eylandt, north-eastern Arnhemland, Kakadu National Park and the Mitchell Plateau and Yampi Peninsula in Western Australia.

The south-eastern nominate race of the Australian masked owl has a home range of 5–10 km2. and it is speculated that the range of the northern masked owl could cover a similar area. Relatively high densities of northern masked owls have been detected on Groote Eylandt, with a home range estimate of 4–5 km2 based on sampling across several large forest grids covering approximately 5000 ha. Surveys indicate lower densities and predicted larger home range areas on Coburg peninsula and very low densities at other Northern Territory mainland range areas.

The diet of the northern masked owl is poorly known, although is presumed to be similar to that of the southern Australian masked owl subspecies, which feed mostly on small to medium-sized terrestrial mammals and take smaller percentages of scansorial and arboreal mammals, insects and birds. Stomach contents of two northern masked owl specimens from the Kimberley contained small birds and marsupials including savanna glider (Petaurus ariel). Northern masked owl have been observed consuming brush-tailed rabbit-rat on Groote Eylandt.

Several northern masked owl call variations have been observed in the field. The most common call is a loud, extended rasping screech that is given while perching or in flight and is possibly used in territorial defense and/or as a contact call. A "chatter" call, described as a loud cackle or continuous chatter, is likely to be associated with courtship display flights by male birds circling over breeding territory (based on other Australian masked owl subspecies) and is sometimes given in response to call broadcast during surveys. Other social calls are poorly known but are likely to be similar to those documented for other Australian masked owl subspecies, including extended high pitched trills, rasping and stuttered hissing when approaching young in the nest or to solicit feeding, churrs and hissing during nest defence and low pitched cooing during mating and courtship.

The IUCN (2018) has assessed the Australian masked owl (Tyto novaehollandiae) as 'least concern' but has not provided subspecific status assessments. The northern masked owl is listed as a vulnerable species under the Commonwealth EPBC Act 1999, vulnerable in Queensland and vulnerable in the Northern Territory.

The Action Plan for Australian Birds 2020 assessed the status of the northern masked owl as vulnerable C2a(i), finding that despite the discovery of a relatively high-density population on Groote Eylandt, declining prey populations on the mainland are likely to be causing ongoing declines. The infrequency of confirmed sightings of this subspecies on the mainland suggests that there is a high level of uncertainty in terms of status and trends.

The northern masked owl appears to be uncommon across most of its range, and a recent population estimate for the Northern Territory and Western Australian distribution (excluding Queensland populations) ranges from 2000 to 5000 mature individuals. There are a limited number of localities where the northern masked owl appears to remain relatively common, including Garig Gunak Barlu National Park, the north-west Kimberley and the Anindilyakwa Indigenous Protected Area (Groote Eylandt). These sites are likely to represent important refuge areas for northern masked owl populations and have potentially been less impacted by fire regime changes, disturbance from pastoralism, feral animals and decline of prey species that has been documented at other locations.

Identified and potential threats to populations of the northern masked owl are related to the direct and indirect actions of humans (Homo sapiens), including land clearing, altered fire regimes, stocking with exotic ruminants, proliferation of feral animals and weeds and atmospheric pollution leading to global heating.

The main threat to northern masked owl populations is thought to be the decline in the availability of mammalian prey linked to more frequent and extensive fires and predation by feral cats, exacerbated in some places by feral herbivore and cattle grazing and weed encroachment. The only sites where prey remain relatively abundant are Groote Eylandt and the Kimberley. The large trees and hollows required for nesting may be reduced in number due to the current regime of more intense and frequent fires. However, these trees continue to be abundant and highly mobile species with large home range areas such as northern masked owls may be less vulnerable to local impacts of fire on key habitat resources. Mining exploration licences and active mining titles cover broad areas of northern masked owl range, including most of Groote Eylandt and Winchelsea Island, and components of north-eastern Arnhemland, Batchelor/Pine Creek, Daly, north-west Kimberley and Yampi regions.

The northern masked owl was ranked as having a medium level of sensitivity to the impacts of global heating in a study conducted by the Australian National Climate Change Adaptation Research Facility.

All content from Kiddle encyclopedia articles (including the article images and facts) can be freely used under Attribution-ShareAlike license, unless stated otherwise. Cite this article:
Northern masked owl Facts for Kids. Kiddle Encyclopedia.