Notholithocarpus densiflorus, commonly known as the tanoak or tanbark-oak, is a broadleaf tree in the family Fagaceae, native to the western United States, in California as far south as the Transverse Ranges, north to southwest Oregon, and east in the Sierra Nevada. It can reach 40 m (130 ft) tall (though 15–25 m (49–82 ft) is more usual) in the California Coast Ranges, and can have a trunk diameter of 60–190 cm (24–75 in).

Notholithocarpus (prev. Lithocarpus) densiflorus leaves are alternate, 7–15 cm (2.8–5.9 in), with toothed margins and a hard, leathery texture, and persist for three to four years. At first they are covered in dense orange-brown scurfy hairs on both sides, but those on the upper surface soon wear off; those on the under surface persist longer but eventually wear off too.

The seed is an acorn 2–3 cm (0.79–1.18 in) long and 2 cm in diameter, very similar to an oak acorn, but with a very hard, woody nut shell more like a hazel nut. The nut sits in a cup during its 18-month maturation; the outside surface of the cup is rough with short spines. The nuts are produced in clusters of a few together on a single stem. The nut kernel is very bitter, and is inedible for people without extensive leaching, although squirrels eat them.

Tanoak is one of the species most seriously affected by "sudden oak death" (Phytophthora ramorum), with high mortality reported over much of the species' range. 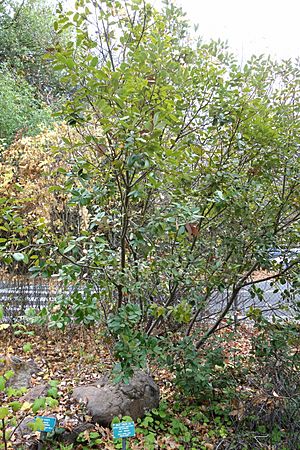 Members of populations in interior California (in the northern Sierra Nevada) and the Klamath Mountains into southwest Oregon are smaller, rarely exceeding 3 m (9.8 ft) in height and often shrubby, with smaller leaves, 4–7 cm (1.6–2.8 in) long; these are separated as "dwarf tanoak", Notholithocarpus densiflorus var. echinoides. The variety intergrades with the type in northwest California and southwest Oregon. Tanoak does grow on serpentine soils as a shrub.

Some California Native Americans prefer this nut to those of many Quercus acorns because it stores well due to the comparatively high tannin content. The Concow tribe call the nut hä’-hä (Konkow language). The Hupa people use the acorns to make meal, from which they would make mush, bread, biscuits, pancakes, and cakes. They also roast the acorns and eat them. Roasted, the seeds can be used as a coffee substitute.

The name tanoak refers to its tannin-rich bark, a type of tanbark, used in the past for tanning leather before the use of modern synthetic tannins. By 1907, the use of tanoak for tannin was subsiding due to the scarcity of large tanoak trees. There were not enough trees around for a worthwhile economic return. By the early 1960s, there were only a few natural tannin operations left in California. The industry was beginning to switch to a synthetic alternative. A mulch made from the leaves of the plant can repel grubs and slugs.

Tanoak tannin has been used as an astringent.

Tanoak is sometimes used as lumber, but is not currently harvested commercially.

All content from Kiddle encyclopedia articles (including the article images and facts) can be freely used under Attribution-ShareAlike license, unless stated otherwise. Cite this article:
Notholithocarpus Facts for Kids. Kiddle Encyclopedia.