O'Reilly's Rainforest Retreat is a tourist destination in Queensland, Australia, situated in the heart of the Lamington National Park, two hours by road south of Brisbane and 90 minutes by road west of the Gold Coast. It is located in the Scenic Rim Region local government area and is part of the Gold Coast hinterland. Access to the mountain resort is via Canungra.

O'Reilly's Rainforest Retreat consists of accommodation villas, picnic grounds and marks the starting point of a number of popular hiking trails. It is well known for its rainforest location, unique and diverse wildlife, and for being the home of the late Bernard O'Reilly, an Australian bushman and author, who is remembered for his efforts in locating the survivors of the 1937 Stinson plane crash.

In 1912, eight men of the O'Reilly family each started farming in the McPherson Range. They milked cattle and collected timber but the income was too little. In 1915 Lamington National Park was established around their land. O'Reilly's Rainforest Retreat was founded in 1926 by the O'Reilly brothers. The initial accommodation was very basic and in the early years access was only via horse and wagon along a precipitous mountain track.

Bird feeding is encouraged with seed available for sale to visitors. Bush walking is another popular activity in the area. 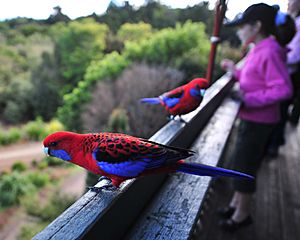 The forests of Lamington National Park provide excellent habitat for a range of birds. Some species have become unconcerned by close interaction with people at O'Reilly's, including the regent bowerbird, Australian king parrot and crimson rosellas. Wonga pigeons and the Australian brush turkey are also common. 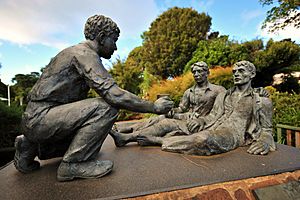 The Australian National Airways Stinson crash was an accident which occurred on 19 February 1937. The Stinson Model A airliner disappeared during a flight from Brisbane to Sydney, carrying five passengers and two pilots. Both pilots and two passengers were killed in the crash. One of the surviving passengers died while attempting to bring help to the other survivors. The wreckage was found by Bernard O'Reilly of the Lamington Guest House who went looking for the aircraft believing it had failed to cross the border. The aircraft had crashed in the McPherson Range on the border between Queensland and New South Wales.

O'Reilly's is situated approximately 8.4 kilometres from the site of the 1937 Stinson plane crash. As a result, the site of the wreck has become a popular hiking destination with bushwalkers. O'Reilly's Rainforest Retreat infrequently organises guided treks to the wreck, but experienced bushwalkers are known to frequently attempt the hike. The hike is renowned for its difficulty due to the steep nature of the McPherson Range where the wreck is situated, and the thick, dense terrain of the rainforest. A memorial to Bernard O'Reilly is located in the grounds around the guesthouse.

In the late 1980s, the Australian Army removed large portions of the wreck using a helicopter. As a result, only a small, skeletal section of the plane's hull remains.

In 1987, O'Reilly's Rainforest Retreat opened the Tree Top Walk, a 180 metre long suspension bridge situated 20 metres above the rainforest floor. The Tree Top Walk provides a bird-eye view of the rainforest canopy and sweeping views of the McPherson Range. It was the first of its kind in Australia.

All content from Kiddle encyclopedia articles (including the article images and facts) can be freely used under Attribution-ShareAlike license, unless stated otherwise. Cite this article:
O'Reilly's Rainforest Retreat Facts for Kids. Kiddle Encyclopedia.