Oglesby is a city in LaSalle County, Illinois, United States. The population was 3,791 at the 2010 census. It is part of the Ottawa–Streator Micropolitan Statistical Area.

Murals were produced in the United States through the Section of Painting and Sculpture, later called the Section of Fine Arts, of the Treasury Department from 1934 to 1943. They were intended to boost the morale of the American people suffering from the effects of the Depression by depicting uplifting subjects. In 1942 artist Fay E. Davis painted an oil on canvas mural titled The Illini and Potawatomes Struggles at Starved Rock in the town's post office. The mural's muted earth tones faded badly over time and it was restored in 1988. 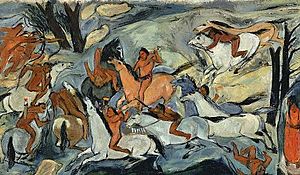 1942 WPA mural The Illini and Potawatomies Struggle at Starved Rock

Oglesby is located near the confluence of the Illinois River and the north-flowing Vermilion River. It was originally called Portland, due to the cement mined and manufactured in the area that was similar to Portland Cement from England. It was renamed in 1913 in honor of Richard Oglesby, a former U.S. Senator and three-time Governor of Illinois.

The surface ground layers around Oglesby had excellent exposed limestone and coal; Oglesby also had adequate riverine transport. It soon became an important center for cement manufacture. Before open-pit mining there were several subsurface cement mines:

As well as several coal mines:

All content from Kiddle encyclopedia articles (including the article images and facts) can be freely used under Attribution-ShareAlike license, unless stated otherwise. Cite this article:
Oglesby, Illinois Facts for Kids. Kiddle Encyclopedia.