Richard James Oglesby (July 25, 1824 – April 24, 1899) was an American soldier and Republican politician from Illinois. He served in the United States Army during the Mexican–American War of 1846–47, and after the war became a prospector during the California Gold Rush and was elected to the Illinois General Assembly. During the American Civil War, Oglesby volunteered for the Union Army and rose to the rank of major general, serving in the Western Theater; he left the army when he was elected Governor of Illinois in 1864, and would serve three non-consecutive terms in that office (from 1865 to 1869, for ten days in 1873, and from 1885 to 1889). He also served as a United States Senator from Illinois from 1873 to 1879.

The town of Oglesby, Illinois, is named in his honor.

Oglesby was born in Floydsburg, Oldham County, Kentucky. He was orphaned and moved to live with his uncle in Decatur, Illinois, in 1832, where he later worked as a farmhand, ropemaker, and carpenter.

With the outbreak of the Mexican–American War, he enlisted as a 1st Lieutenant in Company C, 4th Illinois Volunteer Infantry Regiment taking part in the battles of Veracruz and Cerro Gordo "where his regiment almost captured Mexican President General Santa Anna, but they had to settle for his cork leg, carriage and $20,000 in gold".

He might have participated in what may have been the first baseball game ever played outside the U.S., at the end of April 1847, a few days after the Battle of Cerro Gordo, "with the wooden leg captured (by the Fourth Illinois regiment) from General Santa Anna".

He was mustered out of the volunteer service in May 1847.

He studied at Louisville Law School in 1848, but traveled to California for the gold rush in 1849, where he tried his hand at gold mining. After two years of traveling in Europe, he returned to Illinois in 1851, joined the Republican Party at its formation, ran unsuccessfully for the U.S. Congress in 1858, and was elected to the Illinois Senate in 1860. In 1859 Oglesby married Decatur native Anna White. They had four children; Richard, Elizabeth, Robert, and Olive. 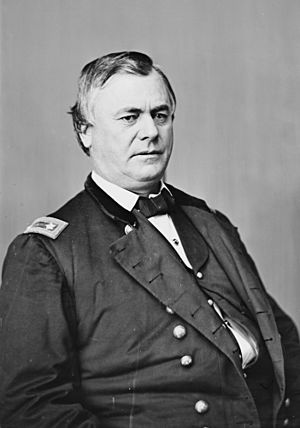 At the start of the Civil War, Oglesby was appointed colonel of the 8th Illinois Volunteer Infantry Regiment on April 25, 1861, and was soon given command of the 1st Brigade, 1st Division, District of Cairo, Department of the Missouri, serving under the command of Ulysses S. Grant. He was a well liked commander known to his troops as "Uncle Dick". He commanded his brigade at the battles of Fort Henry and Fort Donelson and soon after was promoted to brigadier general (March 21, 1862). He commanded the 2nd Brigade, 2nd Division, Army of the Tennessee, during the Siege of Corinth. He was severely wounded in his chest and back at the Battle of Corinth in October 1862.

Oglesby was promoted to major general on November 29, and after a period of recovery, commanded the Left Wing of the XVI Corps, Army of the Tennessee, in western Tennessee and northern Mississippi from April to July 1863. He resigned his commission on May 26, 1864, to run for governor on the Republican ticket.

He was present in the room at the Petersen House when President Abraham Lincoln died on April 15, 1865. 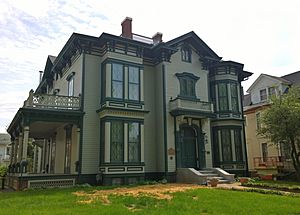 Oglesby Mansion on William Street in Decatur, Illinois where Oglesby and his wife Emma lived from 1874 to 1882

Oglesby was elected by a large majority and served as the Governor of Illinois between 1865 and 1869. During his tenure as governor, he advocated improving the quality of care of the mentally ill and for other groups of disabled citizens. He signed legislation expanding the State Hospital system from one campus to three. After his term ended, he practiced law until 1872, when he agreed to a scheme in which Oglesby ran again for governor, but turned the office over to the lieutenant governor immediately after inauguration in return for a seat in the U.S. Senate. He served as a Senator from 1873 until 1879. In 1884, he was reelected governor for a third time, becoming the first man in Illinois history to serve three times as governor. At the end of his third term as governor, he tried unsuccessfully to be reelected to his Senate seat. He spent his remaining years in retirement and died at his "Oglehurst" estate in Elkhart, Illinois. He is buried there in Elkhart Cemetery. There is a statue of Richard J. Oglesby in Lincoln Park, Chicago.

His son, John G. Oglesby, was a two time Lieutenant Governor of Illinois.

All content from Kiddle encyclopedia articles (including the article images and facts) can be freely used under Attribution-ShareAlike license, unless stated otherwise. Cite this article:
Richard J. Oglesby Facts for Kids. Kiddle Encyclopedia.