Peru is a city in LaSalle County, Illinois, United States. The population was 10,295 at the 2010 census. It is part of the Ottawa, IL Micropolitan Statistical Area. Peru and its twin city, LaSalle, make up the core of Illinois Valley.

Located on the Illinois River, Peru lies 3 miles (4.8 km) west of the intersection of two major interstate highways: Interstate 39 and Interstate 80. The city is also the western terminus of the historic Illinois and Michigan Canal. Before the Illinois Waterway was constructed, the Illinois River was navigable only up to Peru. Starved Rock State Park, a regional tourist attraction, is located 5 miles (8.0 km) south-east of the community. Peru has a twin city on its eastern edge, LaSalle. 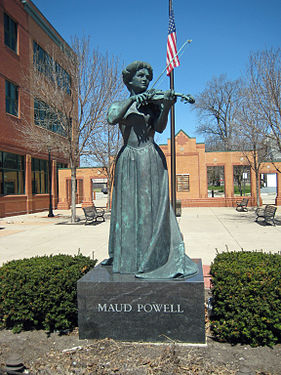 The Maud Powell monument that stands on 4th Street in Peru

The city's first settler was John Hays, who arrived in 1830. The city was organized as a borough in 1838, and was officially incorporated as a city on March 13, 1851. The original plat was between West Street, 4th Street, and East Street (now Pine Street).

Since the first steamboat, "Traveler" reached Peru in 1831, Peru had high hopes of being the western terminus for the Illinois & Michigan Canal. That designation went to LaSalle, but Peru became a busy steamboat port at the head of navigation on the Illinois River. Captain McCormick was involved in the Five Day Line, making record fast trips between Peru and St. Louis. Senator Gilson reported to land surveyor, Grenville Dodge that the town would soon outstrip Chicago due to its favorable location along the river and railroads.

Water Street was a thin ribbon pressed between the bluff and the river, leading to the growth eastward of a large industrial district. It was along the river and the canal, and was serviced by the Rock Island Railroad and Chicago Burlington and Quincy. These important transportation routes, along with coal mining in at least four mines lasting earliest from 1857 until 1949, prompted Peru's rise to an industrial center. Many entrepreneurs grew into prominent businessmen and advanced the interests of Peru and the region. Prominent companies from that time included Maze Lumber, Maze Nails, Peru Plow and Wheel Works, Huse and Loomis Ice Co, Brunner Foundry, Star Union Brewery, Hebel Brewery, Illinois Zinc (Peru and LaSalle were sometimes referred to as "Zinc City") and many others. Peru's citizens were bent on improving their town, so far as constructing a plank road, northwest of town, a toll road meant to reach Dixon, Illinois.

Peru's story became a story of two levels. The story of Water Street and the bottoms, and the town growing above the bluff. Peru tried hard to link the two. For example, the Peru Horse and Dummy Railroad was driven to dissolution by the city's impossible mandate that it create a loop from Water Street to the upper bluff.

In 1884, Stahlberg started the United Clock Company in Peru. Shortly afterward, it went bankrupt and was reorganized with the help of Frederick William Matthiessen as the Western Clock Company. By 1905 it had grown into a national company, producing over 1 million alarm clocks per year. In 1909, they trademarked "Westclox". In 1917 they became a model for workers' benefits, one of the early companies to pay life insurance and have a safety committee. Later on, they limited the work week, constructed a company park with a tennis court and horseshoe courts, developed workers' housing, and established a school for watchmakers with provision for scholarships. In 1935 it was the safest company in the nation, with 11 million hours without a lost time accident. Despite these advances, one company that they worked with, the Radium Dial Company, saw its employees get radiation poisoning from working with radium.

During World War II the company made mechanical fuses for the government and saw over 600 employees in the armed forces. At its height it manufactured nearly 2 million clocks and watches annually and employed over 4,000 persons. It closed the Peru factory in 1980, causing a rapid decline in population in LaSalle and Peru. 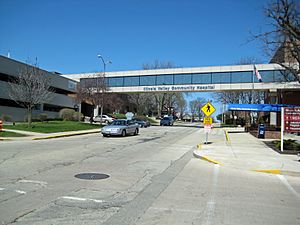 There are a number of business districts in Peru. The largest is at the intersection of I-80 and IL-251. Then there are three smaller districts along the US-6 Corridor, including Peru's downtown. The largest employers in Peru are the Peru Mall, the Illinois Valley Community Hospital, Walmart, James Hardie, Officemax, the American Nickeloid, Liberty Village, Double D Express, Heritage Manor Nursing Home, Eakas, Target, and Horizon Industries.

Peru is the home of at least three very old companies. It is the national headquarters of American Nickeloid, started in 1898, and the W.H. Maze Co, dealing in lumber and nails, which started the year the Illinois and Michigan Canal opened in 1848. Maze Nails is one of America's last remaining nail makers. Peru is home to the offices of Carus Chemical Company, started in 1915, today one of the largest manufacturer of potassium permanganate in the world.

In 2021, the DuPage Pistol Shrimp baseball team relocated from Lisle, Illinois to Peru, becoming the Illinois Valley Pistol Shrimp. The Pistol Shrimp, a member of the collegiate Prospect League, will play their first season in Peru during the summer of 2021.

All content from Kiddle encyclopedia articles (including the article images and facts) can be freely used under Attribution-ShareAlike license, unless stated otherwise. Cite this article:
Peru, Illinois Facts for Kids. Kiddle Encyclopedia.