The north-flowing Vermilion River and the south-flowing Middle Fork Vermilion River run on what is close to a straight line between Oglesby and Danville. In presettlement times, the two rivers drained an upland marsh near Roberts. It is possible that early settlers regarded these as a single river that flowed in two directions. It is also possible that, in early settlement times, these rivers formed a canoe route between the Illinois River and Wabash River, with a portage through the marshes near Roberts. This may explain why the two rivers have the same name.

The north-flowing Vermilion flows in a northerly direction from its origin in Livingston and Ford counties in north central Illinois, eventually emptying into the Illinois River, near Oglesby. Perhaps it is best known for its stretch of whitewater between Lowell and Oglesby, Illinois, which is one of few found in Illinois.

The following cities and towns are drained by the Vermilion:

The following counties are drained at least in part by the Vermilion River: 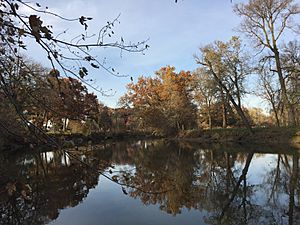 All content from Kiddle encyclopedia articles (including the article images and facts) can be freely used under Attribution-ShareAlike license, unless stated otherwise. Cite this article:
Vermilion River (Illinois River tributary) Facts for Kids. Kiddle Encyclopedia.