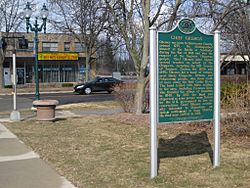 Chief Okemos historic marker at the Four Corners of Okemos

Okemos ( oh-KA-mis) is a census-designated place (CDP) in Ingham County in the U.S. state of Michigan. The population of the CDP was 21,369 at the 2010 census. Okemos is located mostly within Meridian Charter Township, with a small portion extending south into Alaiedon Township and east into Williamstown Township.

Okemos contains its own post offices with the 48805 and 48864 ZIP Codes, as well as its own school district, Okemos Public Schools, that also serves portions of the surrounding area. 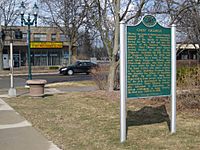 Chief Okemos sign at the Four Corners of Okemos, Michigan

There were 9,194 households, out of which 31.7% had children under the age of 18 living with them, 52.3% were married couples living together, 6.7% had a female householder with no husband present, and 38.6% were non-families. 25.9% of all households were made up of individuals, and 4.7% had someone living alone who was 65 years of age or older. The average household size was 2.44 and the average family size was 3.04.

In 2011, CNN Money Magazine rated Okemos as the 12th-best city to live in for "the rich and single".

This climatic region is typified by large seasonal temperature differences, with warm to hot (and often humid) summers and cold (sometimes severely cold) winters. According to the Köppen Climate Classification system, Okemos has a humid continental climate, abbreviated "Dfb" on climate maps.

All content from Kiddle encyclopedia articles (including the article images and facts) can be freely used under Attribution-ShareAlike license, unless stated otherwise. Cite this article:
Okemos, Michigan Facts for Kids. Kiddle Encyclopedia.