The location that was later to become Williamston started as the cross-road of the Grand River and Saginaw Indian Trails. It was first occupied by a small band of the Saginaw tribe of the Chippewa People which by the mid-19th century used the area as a 'summer village' (it was not used by them year-round, but they 'wintered' in the area that is now Meridian Township). They used Williamston for planting crops, burying their dead, and holding an annual spring gathering, primarily using the land just north of the Red Cedar River.

The area was settled by Europeans in 1834 when Hiram and Joseph Putnam moved briefly to the area from Jackson. They spent less than one full year in the area, planting and then harvesting one crop of oats. Today, inside the city limits, Williamston Road becomes Putnam Street, having been named in their honor. (For many years, several street signs inside the city were misspelled as "Putman Street", leading to confusion about the correct spelling.)

In 1839, the Putnams sold their land to Oswald B., James M., and Horace B. Williams, three brothers from Batavia, New York. James M. "Miles" Williams, who built a dam, saw mill and later a grist mill in town, eventually platted the land in 1845 and named the town "Williamstown" after himself. It is unknown how it lost the "w" in its name.

The town was a popular stop on the Grand River trail (that later became a plank road) from Detroit to Lansing in the 19th century. That trail is now Grand River Avenue (M-43) which runs through downtown Williamston. Because the primary means of transportation at that time was the horse and buggy and because the trip from Detroit to Lansing took more than one day, Williamston became a convenient overnight stop.

The town was incorporated as a village in 1871, and later as a city on April 1, 1945. A later revised City Charter was adopted by the people effective in April 1963. This charter has been amended several times, but remains in effect today.

A history of the area was published for the City's centennial celebration in 1971. It included many photographs and stories of the early city and its inhabitants. There were earlier histories, as well, published in 1880, the 1930s, and in 1963.

The Red Cedar River, a tributary of the Grand River, passes just north of the center of town. Lake Lansing is also located in nearby Haslett and is approximately 500 acres (2.0 km2) in size.

A major event in town is the week-long festival known as the Red Cedar Jubilee. It typically begins the last week of June with a children's 'bike parade' through town, and ends with the Boy Scout pancake breakfast on Sunday morning. Events of the Jubilee include a demolition derby, duck race, and chicken barbecue, as well as other events and games for children of all ages. The proceeds from some of the events go to benefit local community groups. One such group, the Lions Club, runs a food and beverage tent during the festival.

The first Thursday and Friday of August brings the Dog Days of Summer [2] to town. This event encourages area dog owners to bring their pets for activities including a pet parade, ugly dog contest, agility demonstrations, and Williamston's Deputy Dog contest. The Ingham County Animal Shelter conducts a pet adoption and fundraising drive during the festival.

The City of Williamston also sponsored a Labor Day 'Bridge Walk' annually. The former Mayor, Kenneth Zichi, led a group on a brief 1.5–2.5-mile-long (2.4–4.0 km) walking tour of town, pointing out sites of historic interest, and including a 'bridge crossing' of the Red Cedar River. Patterned after the 'Mackinac Bridge Walk' led by Michigan's governor, this was an opportunity to learn a bit more about the history and culture of a small town in Michigan, and enjoy the holiday.

On the first Saturday in December, the downtown hosts the annual Light Parade. Activities begin in the afternoon and culminate with a parade of lighted floats and vehicles through downtown Williamston. Afterward, children are given a chance to meet Santa Claus. Typically, stores and street booths sell hot drinks and musicians wander the street during the afternoon and evening. Occasionally, there is an ice sculpture or two spread throughout town.

This climatic region is typified by large seasonal temperature differences, with warm to hot (and often humid) summers and cold (sometimes severely cold) winters. According to the Köppen Climate Classification system, Williamston has a humid continental climate, abbreviated "Dfb" on climate maps. 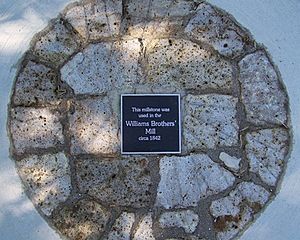 Grindstone from the Williams' Mill of the mid-1800s

The modern economy is primarily that of a bedroom community. Many residents commute to local, larger towns such as Okemos, East Lansing, or Lansing, where most of the employment is located. The Williamston community was once very reliant on farming as an occupation, however, its prominence in the community has since declined. Although there is no longer much farmland within the city limits, the surrounding area is still devoted to farming.

Today, Williamston is well known to the mid-Michigan area for its antiques stores and specialty shops in the downtown area. Williamston is home to two golf courses, The Brookshire Restaurant and Golf Course and Wheatfield Valley Golf Course, as well as a live theatre called Williamston Theatre, and an old-style single screen movie theatre called The Sun Theatre. There is a Williamston branch of the Capital Area District Library, restaurants, a market, grocery store, the Sun Theatre, and numerous smaller clothing stores, boutiques, special interest shops and antique dealers. The Meridian Mall is located in nearby Okemos. The largest employer in the City is the Williamston Community Schools with 170 employees.

Habitat for Humanity has a restore and training facility for staff and volunteers.

An industrial park opened near I-96, the major corridor between Grand Rapids, Lansing and Detroit.

Public education in Williamston and the surrounding area is provided by Williamston Community Schools. The schools consist of K-2 (Discovery Elementary and 3-5 (Explorer Elementary), 6-8 (Williamston Middle), and 9-12 (Williamston High School).

The private schools of St. Mary School and Memorial Lutheran are located in Williamston and nearby Williamstown Township, respectively.

All content from Kiddle encyclopedia articles (including the article images and facts) can be freely used under Attribution-ShareAlike license, unless stated otherwise. Cite this article:
Williamston, Michigan Facts for Kids. Kiddle Encyclopedia.