Kids Encyclopedia Facts
This page is about the Old Ship Meetinghouse in Massachusetts. For the church in Alabama, see Old Ship African Methodist Episcopal Zion Church.

The Old Ship Church (also known as the Old Ship Meetinghouse) is a Puritan church built in 1681 in Hingham, Massachusetts. It is the only surviving 17th-century Puritan meetinghouse in America. Its congregation, gathered in 1635 and officially known as First Parish in Hingham, occupies the oldest church building in continuous ecclesiastical use in the United States. On October 9, 1960, it was designated a National Historic Landmark and on November 15, 1966, it was added to the National Register of Historic Places.

Old Ship Church is, according to The New York Times, "the oldest continuously worshiped-in church in North America and the only surviving example in this country of the English Gothic style of the 17th century. The more familiar delicately spired white Colonial churches of New England would not be built for more than half a century." Within the church, "the ceiling, made of great oak beams, looks like the inverted frame of a ship," notes The Washington Post. "Built in 1681, it is the oldest church in continuous use as a house of worship in North America."

The most distinctive feature of the structure is its Hammerbeam roof, a Gothic open timber construction, the most well-known example being that of Westminster Hall. Some of those working on the soaring structure were no doubt ship carpenters; others were East Anglians familiar with the method of constructing a hammerbeam roof. 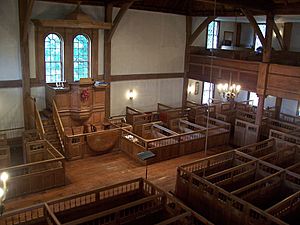 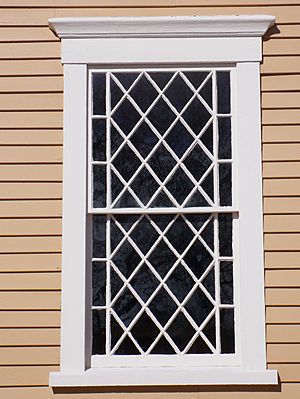 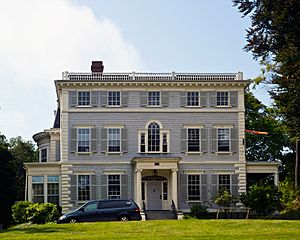 The first minister of the Hingham congregation who built Old Ship was the Rev. Peter Hobart, who had attended what was then Puritan-dominated University of Cambridge. Natives of Hingham in the county of Norfolk in East Anglia, Peter Hobart, his father Edmund and his brother Capt. Joshua Hobart were among Hingham's most prominent early settlers. Edmund Hobart and his wife Margaret (Dewey), said Cotton Mather, "were eminent for piety ... and feared God above many." Assisting Hobart in the foundation of the congregation was Rev. Robert Peck, Hobart's senior and formerly rector of St Andrew's Church in Hingham, Norfolk.

After 44 years of service, minister Peter Hobart died on January 20, 1679, on the eve of the building of the new house of worship. Hobart's diary of events in Hingham, begun in the year 1635, was continued on his death by his son David. By the time Old Ship was built, Harvard-educated Rev. John Norton, who had been ordained by Peter Hobart, had assumed Hobart's ministry. While Rev. Norton was the first pastor of the congregation at its new home in Old Ship Church, Rev. Peter Hobart was the founder of the congregation, although he died before the new meetinghouse was finished.

Old Ship Church deacon John Leavitt, whose son John married Rev. Hobart's daughter Bathsheba, was deacon when Old Ship was constructed and he argued forcefully for the construction of a new meetinghouse. The matter of replacing the old thatched log meeting house stirred intense emotion in Hingham, and it took two heated town meetings to settle on a site for the new edifice, which was built on land donated by Capt. Joshua Hobart, brother of Rev. Peter Hobart. Ultimately, the town appropriated £430 for the new building, said to be the equal of any in the Massachusetts Bay Colony. The modern frame edifice, devoid of ornamentation, was raised in 1681, and accommodated its first worship service the following year. Old Ship, with its stark wooden pulpit and stripped-down interior, could not have been further from the houses of worship known to many of the East Anglians who settled Hingham, Massachusetts. It was, in a sense, the anti-Wool church.

It was a hot day, the 26th of July 1681, when the townspeople gathered on the wooden knoll bordering on Bachelor's Row (now Main Street), Hingham, Mass, to take part in what the Selectmen's record described as the 'raising of the frame of the new Meeting House.' It was a community undertaking and every freeman in the town had been assessed for the cost of the structure according to his worth, in amounts ranging from one pound to fifteen pounds. There were all there, regardless of the heat, including Deacon John Leavitt, well over seventy years old, who had led the successful fight to have the new Meeting House erected approximately on the site of the old.

Originally the building was furnished with backless wooden benches, with the first box pews being installed in 1755.

In the Victorian period, the box pews were removed and replaced with curved pews fanning outward from the pulpit, while the walls were papered and drapes were added to the windows. The church was restored to its current appearance, reflecting its 17th and 18th century characteristics, in 1930.

The current minister is Kenneth Read-Brown, a descendant of Rev. Peter Hobart. The congregation is Unitarian Universalist and is a Welcoming Congregation. Some of the meetinghouse furnishings still in use date to its founding: Old Ship's christening bowl, for instance, was made before 1600 and was likely brought to the Massachusetts Bay Colony by emigrants from Hingham, England.

Old Ship Church is surrounded by a large colonial graveyard amidst gently undulating hills. The graveyard, Hingham Cemetery, is sometimes called the First Settlers cemetery, though more commonly it is called Old Ship Church Cemetery, even though it is independent of the Old Ship Church. It was originally part of a 6-acre (24,000 m2) tract of land granted by the town to Thomas Gill, one of Hingham's earliest settlers. (It now comprises 16 acres (65,000 m2), and is the largest and oldest cemetery in Hingham.) Buried within its precincts are many of Hingham's earliest settlers and their descendants, including members of the Cushing, Hersey, Otis, Chaffee, Lane, Andrews, Hobart, Loring, Bates, Leavitt, Thaxter, Tower, Beal, Lincoln, Fearing and other prominent early families.

The oldest burials date from at least 1672, before the building of the current meeting house. The Settlers' Monument in Old Ship burying ground marks the place where the remains of Hingham's earliest settlers were moved after their initial burying place along modern-day Main Street, in front of Old Ship Church, was excavated for the passage of horse-drawn trolleys about 1835.

All content from Kiddle encyclopedia articles (including the article images and facts) can be freely used under Attribution-ShareAlike license, unless stated otherwise. Cite this article:
Old Ship Church Facts for Kids. Kiddle Encyclopedia.