The Old Stone House was constructed in three phases during the 18th century and is an example of vernacular architecture. The house was built as a one-story structure. Additions were later made, and it was used both as a residence and for business. In the mid-20th century, at one time it was the site of a used-car dealership. After acquisition and renovation by the National Park Service (NPS) in the 1950s, the Old Stone House was adapted as a house museum. The Old Stone House stands among the neighborhood's stores and restaurants as an example of local history for tourists, shoppers, and students. The building is considered part of the Rock Creek Parkway urban natural area and was listed on the National Register of Historic Places in 1973. The Old Stone House is also a contributing property to the Georgetown Historic District, a National Historic Landmark. Today, the home is 85% original to its 18th-century construction.

In 1764, Christopher and Rachel Layman bought Lot Three, a piece of land in Georgetown's commercial district. They paid £1 10s. and financed the construction of a simple one-room house the following year. The lot faced Bridge Street, now known as M Street, NW. The Laymans' only possessions were Christopher's tools, a stove, Bibles, and some furniture. Christopher died unexpectedly in 1765, and the widowed Rachel Layman remarried two years later. She sold the house to another widow, Cassandra Chew.

Chew was a member of the upper-middle class and owned several properties in and around Georgetown. Because of her wealth, Chew was able to finance the construction of a rear kitchen in 1767 and a second floor addition to the house between 1767 and 1775. The third floor originated in a property line dispute during the 1790s: the original west wall had been constructed six feet (2 m) beyond the property line and had to be dismantled. Chew used the opportunity to add the upper floor, which was completed by 1790.

Following the American Revolutionary War, government officials carved out land from Virginia and Maryland to create as the new nation's capital. Pierre (Peter) Charles L'Enfant, appointed by President George Washington to design the city layout, arrived in Georgetown on March 9, 1791, and began his work. Washington and L'Enfant held their meetings at Suter's Tavern, a former building owned by John Suter near 31st and K Streets, NW. At the time, John Suter, Jr. was renting a room at the Old Stone House. For many years, locals believed that Washington and L'Enfant had met at the Old Stone House instead. This folklore is the reason the house was never demolished, and for many years a sign hung over the front door which said, "George Washington's Headquarters." After some research done by the National Park Service, they learned that the folklore was not true. By the time they had discovered that, they already owned the House and the property. 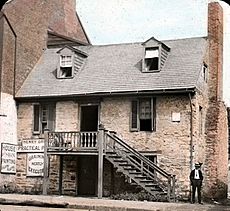 When Chew died in 1807, she bequeathed Old Stone House to one of her daughters, Mary Smith Brumley, who became the first of many owners who operated businesses from the house. Like her mother, Brumley ran a successful merchant's shop inside the home. The house, then known as the Layman home after the first owners, remained in the family until 1875.

Over the years, the house had been used as a shop for hats, tailors, locksmiths, clockmakers, house roofers, and house painters. The Old Stone House was still privately owned in 1953 – serving as used car dealership, with the backyard converted to a parking lot – when the Federal government purchased the property for $90,000 ($717,100 today) and transferred it to the National Park Service for management. Between 1953 and 1960, the NPS removed the majority of 19th- and 20th-century intrusions to the home, and the parking lot was redeveloped as an English garden.

Old Stone House is an example of vernacular architecture. The exterior of the house, constructed of blue granite and fieldstone, was quarried from a location two miles (3 km) away near the Potomac River. The walls range from two to three feet (60–90 cm) thick. The oak used in the house was harvested from forests that were once predominant in Georgetown.

On the first floor, the original roof and front door were constructed of solid oak and cut with a pit saw. Marks left by the large saw can be seen on the first floor. The kitchen walls and fireplace contain irregular stones that were stacked and affixed with a mortar consisting of sand, lime, ash, and water. The kitchen's hearth is large enough to heat the entire house. 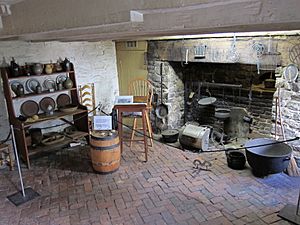 The second floor architecture differs significantly from the first floor since Chew was able to afford higher quality building material. A second doorway and staircase were constructed for family members and guests. The original entrance was then reserved for workmen and deliveries. There are three rooms located on this floor, the dining room, a bedroom, and the parlor. The hallway between the dining room and two front rooms features a high ceiling for ventilation in Georgetown's hot summers. The second floor walls were plastered and painted. Chair rails were added to prevent damage to the walls. In the dining room, a dumbwaiter concealed by recessed pine cabinetry delivered food from the kitchen below. A clock believed to have been made by John Suter Jr., located in the dining room, is the only original piece of furniture left in the house. The clock dates back to the early 19th century. The bedroom features a carved wooden mantle that is believed to be of French origin.

The third floor, constructed of brick, was a private space. It was completed around 1790. It is much plainer than the second floor, with unfinished paneling and unpainted walls. There are three rooms on this floor, believed to be children's bedrooms and a storage area. A closet is attached to the third-floor bedroom, an unusual feature in 18th-century colonial houses. One often-repeated myth about the rarity of closets in British North America was that they were subject to a "closet tax". In reality, there is no evidence of any such tax being levied by the colonial governments. The rarity of closets was largely due to the lower number of clothes owned by most people of the time.

The Colonial Revival garden, located behind the house and bordered by a white picket fence, is 399 feet (122 m) deep and 76 feet (23 m) wide. Roses, perennials, and bulbs are located throughout the garden.

Visitors are greeted by staff who tell the history of one of the oldest structures in Washington, D.C. The kitchen, parlor, and bedrooms, furnished as they would have been in the late 18th century, are open for viewing. A gift shop operated by Eastern National is located inside the front room of the house. The garden is used for simple wedding ceremonies and as an area for locals and tourists to rest while shopping or to enjoy a lunch break. The building is open to the public seven days a week, from 11:00 am to 6:00 pm (eastern time) Monday through Thursday and Friday through Sunday 11:00 am to 7:00 pm (eastern time). The garden is open to the public every day from dawn until dusk.

Currently, the upper levels of Old Stone House are closed for renovation by the National Park Service until further notice.

All content from Kiddle encyclopedia articles (including the article images and facts) can be freely used under Attribution-ShareAlike license, unless stated otherwise. Cite this article:
Old Stone House (Washington, D.C.) Facts for Kids. Kiddle Encyclopedia.