Oodnadatta, in the Australian state of South Australia, is a small town surrounded by an area of 7,800 square kilometres (3,000 sq mi) with cattle stations in arid pastoral rangelands close to the Simpson Desert, 1,011 km (628 mi) north of Adelaide and 112 m above sea level. It can be reached by an unsealed road from Coober Pedy or via the unsealed Oodnadatta Track from Marree to Marla or from the north via Finke, Northern Territory ("Old Ghan Heritage Trail"). The name is derived from Arrernte utnadata, meaning "mulga blossom".

John McDouall Stuart explored the region in 1859. The route mapped by Stuart in his journeys of 1857 to 1862 was adopted as part of the Overland Telegraph Line route. There was no township at Oodnadatta in those days. It was called the Yellow Waterhole, or Angle Pole, and later was known as Hookey's Waterhole.

By the 1880s this route was being used by camel trains, led by cameleers from Afghanistan, both of whom were especially brought to Australia for the task of hauling goods into Central Australia for use by pioneer settlers. Camels were the only pack animals capable of taking on a six-week journey in often extreme heat, through sandy terrain. When train travel arrived, many of these camels were left to run wild in the outback where they number in the tens of thousands today. Many Afghan men and their families eventually settled in Oodnadatta and Maree, some marrying into the Aboriginal community.

Oodnadatta became the terminus of the Great Northern Railway in 1890, and remained so until the line was extended to Alice Springs in 1929. The line became known as the Central Australian Railway and the train service on the line was known as the Ghan in honour of the Afghan cameleers. The railway was built with narrow gauge (1,067 mm (3 ft 6 in)) tracks; train traffic was frequently disrupted by washouts and other damage to the trackbed leading to a slow and unreliable service. The Algebuckina Bridge is nearby. The railway through Oodnadatta was closed in 1981; a new standard gauge line was built to the west bypassing Oodnadatta.

Both the historic Oodnadatta railway station, now a museum, and the nearby Algebuckina Bridge are listed on the South Australian Heritage Register.

Oodnadatta has a hot desert climate (Köppen climate classification BWh) and has also recorded the highest reliably measured maximum temperature in Australia: 50.7 °C (123.3 F) on 2 January 1960. A higher temperature was recorded at Cloncurry in 1889; however, this has since been shown to have been recorded in a non-standard enclosure and likely to have been considerably cooler than first believed. There is a large sign in Oodnadatta claiming the town is "The driest town, the driest state of the driest Continent".

The name Oodnadatta has been used as a name for a crater on the planet Mars. 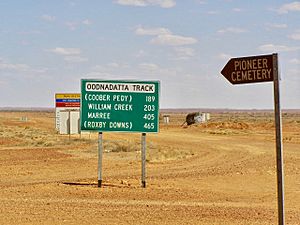 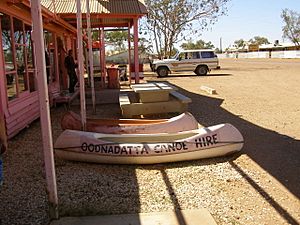 The Pink Roadhouse (so-called because it is painted bright pink) is a focal point for the town, providing petrol, a general store, meals, post office facilities and canoe hire. Although they really do have canoes (also painted bright pink), it is not clear where to use them in the surrounding area unless the local waterholes are recently filled.

There is a museum in the old Ghan railway station, and a staffed medical centre. The railway station comprises a large and imposing Victorian-era home built for the station master's family, with verandahs on three sides, very high ceilings for coolness, and a cellar. Abutting the station-masters residence is the railway station office itself. The whole precinct has been kept in very good condition since the line closed.

All content from Kiddle encyclopedia articles (including the article images and facts) can be freely used under Attribution-ShareAlike license, unless stated otherwise. Cite this article:
Oodnadatta Facts for Kids. Kiddle Encyclopedia.