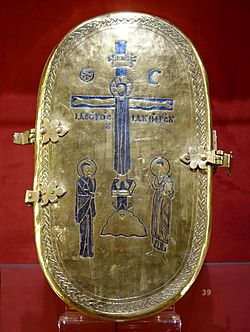 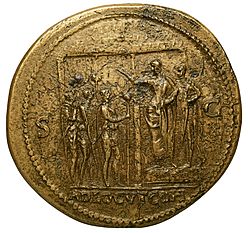 An orichalcum sesterce coin from the Roman Empire.

Orichalcum or aurichalcum, ὀρείχαλκος is the name of a metal or two different metals. Old writings from ancient Greece talk about orichalcum and the Romans made coins out of a metal they called orichalcum, but they might not have been the same metal. People today are not sure exactly what it was. Some scholars think orichalcum was the ancient Greek name for platinum. Others think it was an alloy, or mixture, of copper and either gold, tin, or zinc. Scientists examined Roman coins and found a mixture of copper and zinc.

Some people think name aurichalcum comes from the word aurum for "gold," but it does not.

In general, when ancient Greek writers wrote about orichalcum, they said it was a metal that looked like gold but that they did not know much else about it. To Homer, Hesiod and Plato, orichalcum was a metal from much earlier times that did not exist in their own time and place.

Plato wrote about orichalcum in his book Critias. In the book, Plato says orichalchum was in the ground of the legendary island of Atlantis. To the Atlanteans, it was the second-most-valuable metal, after gold. Plato says the Atlanteans put orichalcum on their city walls and temples. Plato calls orichalcum "only a name" in his own time, meaning he did not think he had ever seen orichalcum.

The ancient Romans also had a metal that they called orichalcum. Around the time the Roman Republic ended and the Roman Empire started, the Romans stopped making coins out of bronze and started making them out of orichalcum: asses coins, sestertii coins, dupondii coins and semisses coins.

Roman orichalcum does corrode over time, the way iron rusts and silver tarnishes.

Scientists analyzed Roman coins and saw they were made of copper and zinc. During the early days of the Roman Empire, Romans invented a better way to make zinc-copper alloys. This way is called cementation. To do it, the metalworker has to heat the zinc and copper to exactly the correct temperature. Then there can be as much as 30% zinc in the orichalcum.

Orichalcum appears in many works of fiction, especially stories about Atlantis. It is in television shows, for example The Mysterious Cities of Gold and Nadia: The Secret of Blue Water. It is in video games, for example Castlevania: Curse of Darkness and Elder Scrolls.

All content from Kiddle encyclopedia articles (including the article images and facts) can be freely used under Attribution-ShareAlike license, unless stated otherwise. Cite this article:
Orichalcum Facts for Kids. Kiddle Encyclopedia.