Osama bin Mohammed bin Awad bin Laden Arabic: أسامة بن محمد بن عوض بن لادن Usāmah bin Muḥammad bin ‘Awaḍ bin Lādin; 10 March 1957 – 2 May 2011) was the founder of al-Qaeda, the Sunni militant islamist organization, that claimed responsibility for the September 11 attacks on the United States, along with numerous other mass-casualty attacks against civilian and military targets. He was a Saudi Arabian, a member of the wealthy bin Laden family, and an ethnic Yemeni Kindite.

He was born in the bin Laden family to billionaire Mohammed bin Awad bin Laden in Saudi Arabia. He studied there in college until 1979, when he joined the mujahideen forces in Pakistan against the Soviets in Afghanistan. He helped to fund the mujahideen by funneling arms, money and fighters from the Arab world into Afghanistan, also gaining popularity from many Arabs. In 1988, he formed al-Qaeda. He was banished from Saudi Arabia in 1992, and shifted his base to Sudan, until US pressure forced him to leave Sudan in 1996. After establishing a new base in Afghanistan, he declared a war against the United States, initiating a series of bombings and related attacks. Bin Laden was on the American Federal Bureau of Investigation's (FBI) lists of Ten Most Wanted Fugitives and Most Wanted Terrorists for his involvement in the 1998 U.S. embassy bombings.

From 2001 to 2011, bin Laden was a major target of the War on Terror, as the FBI placed a $25 million reward on him in their search for him. On May 2, 2011, bin Laden was shot and killed inside a private residential compound in Abbottabad, Pakistan, by members of the United States Naval Special Warfare Development Group and Central Intelligence Agency operatives in a covert operation ordered by U.S. President Barack Obama.

Bin Laden probably believed that the restoration of Sharia law would set things right in the Muslim world, and that all other ideologies—"pan-Arabism, socialism, communism, democracy"—must be opposed. These beliefs, along with violent expansive jihad, have sometimes been called Qutbism.

He believed Afghanistan under the rule of Mullah Omar's Taliban was "the only Islamic country" in the Muslim world. Bin Laden had consistently talked about his belief in the need for violent jihad to make right what he believed are injustices against Muslims perpetrated by the United States and sometimes by other non-Muslim states, the need to eliminate the state of Israel, and the necessity of forcing the US to withdraw from the Middle East. He had also called on Americans to "reject the immoral acts of homosexuality, intoxicants (e.g. alcohol) and gambling in an October 2002 letter.

One of Bin Laden's most infamous beliefs was that civilians, including women and children, are legitimate targets of jihad. Bin Laden was antisemitic, and had delivered warnings against alleged Jewish conspiracies: "These Jews are masters of usury and leaders in treachery. They will leave you nothing, either in this world or the next". Shia Muslims have been listed along with "Heretics,... America and Israel," as the four principal "enemies of Islam" at the ideology classes of bin Laden's Al-Qaeda organization.

In keeping with Wahhabi beliefs (the Saudi type of Islam), bin Laden opposed music on religious grounds, and his attitude towards technology was mixed. He was interested in "earth-moving machinery and genetic engineering of plants" on the one hand, but rejected "chilled water" on the other.

His viewpoints and methods of achieving them led to him been designated as a terrorist by scholars, journalists from the New York Times, the British Broadcasting Corporation, Qatari news station Al Jazeera, analysts such as Peter Bergen, Michael Scheuer, Marc Sageman, and Bruce Hoffman and he was indicted on terrorism charges by law enforcement agencies in Madrid, New York City, and Tripoli. He stayed in hiding until he was killed by the United States in Pakistan, in May 2011.

The form used here, Osama bin Laden, is used by most English-language mass media. This includes CNN and the BBC. The FBI and Fox News use Usama bin Laden. Often the name is abbreviated to UBL.

The bin Laden family (or "Binladin," as they like to be called) usually use the name as a surname in the Western style. The family company is known as the Binladin Brothers for Contracting and Industry. It is one of the largest corporations in Saudi Arabia.

Bin Laden had many aliases and nicknames, such as "the Prince", "the Emir", "Abu Abdallah", "Mujahid Shayekh", and "the Director".

Bin Laden was first married at the age of 17 to a Syrian cousin. Her name was Najwa Ghanem. She was probably two years younger than he. They had 11 children. Najwa left bin Laden just before 9/11. 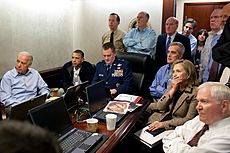 U.S. President Barack Obama launched a mission, "Operation Neptune Spear", where United States Special Operation forces raided bin Laden's hideout compound. On the night of 2 May 2011 (Pakistani time; 1 May 2011 U.S. time), bin Laden was killed by bullets to the chest and head. His body was buried at sea later that day so there would be no grave.

All content from Kiddle encyclopedia articles (including the article images and facts) can be freely used under Attribution-ShareAlike license, unless stated otherwise. Cite this article:
Osama bin Laden Facts for Kids. Kiddle Encyclopedia.