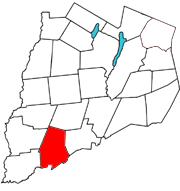 Otego is a town in Otsego County, New York, United States. The population was 3,115 at the 2010 census. The name is a native word meaning "where there is fire."

The Town of Otego is on the south border of the county and contains a village called Otego. The town and village are southwest of Oneonta.

The town was first settled around 1775, but few more arrived until after the American Revolution. Tension between ethnic Germans and New Englanders slowed early development.

The Town of Otego was formed in 1822 from the Towns of Unadilla and Franklin (in Delaware County) as the "Town of Huntsville." In 1830, the name was changed to Otego, when part of the Town of Milford was added.

The Otsdawa Creek Site was listed on the National Register of Historic Places in 1980.

The south town line is the border of Delaware County.

Interstate 88 and New York State Route 7 follow the course of the Susquehanna River.

There were 1,234 households out of which 33.8% had children under the age of 18 living with them, 56.2% were married couples living together, 9.6% had a female householder with no husband present, and 29.1% were non-families. 22.0% of all households were made up of individuals and 10.3% had someone living alone who was 65 years of age or older. The average household size was 2.54 and the average family size was 2.93.

Communities and locations in the Town of Otego

All content from Kiddle encyclopedia articles (including the article images and facts) can be freely used under Attribution-ShareAlike license, unless stated otherwise. Cite this article:
Otego (town), New York Facts for Kids. Kiddle Encyclopedia.