Overtown is a neighborhood of Miami, Florida, United States, just northwest of Downtown Miami. Originally called Colored Town during the Jim Crow era of the late 19th through the mid-20th century, the area was once the preeminent and is the historic center for commerce in the black community in Miami and South Florida.

It is currently bound by NW 20th Street to the north, NW 5th Street to the south, the Miami River, Dolphin Expressway (SR 836), and I-95 (north of the Midtown Interchange) to the west, and the Florida East Coast Railway (FEC) and NW 1st Avenue to the east. Local residents often go by the demonym "Towners." 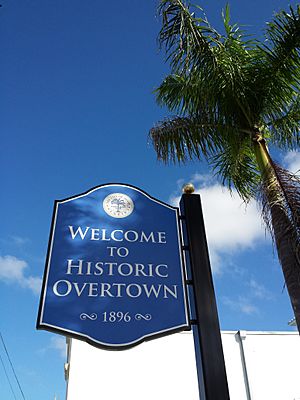 A part of the historic heart of Miami, it was designated as a "colored" neighborhood after the creation and incorporation of Miami in 1896. The incorporation of Miami as a city occurred at the insistence of Standard Oil and FEC railroad tycoon Henry Flagler, whose mostly black American railroad construction workers settled near what became Downtown Miami, just north of Flagler's Royal Palm Hotel on the Miami River. Owing to a substantive black population, 168 of the 362 men who voted for the creation of the city of Miami were counted as "colored," but the separate but equal segregation laws of the Deep South dictated the city designate the portion of the city, in this case, north and west of FEC railroad tracks, as "Colored Town."

The second-oldest continuously inhabited neighborhood of the Miami area after Coconut Grove, the area thrived as a center for commerce, primarily along Northwest Second Avenue. Home to the Lyric Theatre (completed in 1913) and other businesses, West Second Avenue served as the main street of the black community during an era which, up until the Civil Rights Act of 1964, barred black residents from entering middle and upper income white areas like Miami Beach and Coral Gables without "passes." During the Florida land boom of the 1920s, Overtown was home to one of the first black millionaires in the American South, D. A. Dorsey (who once owned Fisher Island), and the original Booker T. Washington High School, then the first high school educating black students south of Palm Beach. Community organizing and mobilization during the era, as such in actions of Reverend John Culmer, who advocated for better living conditions for lower class blacks living in abject squalor during the 1920s, led to the completion of Liberty Square in 1937 in what is now-called Liberty City. Northwest Second Avenue and the surrounding neighborhood, once-called the "Little Broadway" of the South, by the 1940s hosted hundreds of mostly black-owned businesses, ranging from libraries and social organizations to a hospital and popular nightclubs.

Popular with blacks and whites alike, Overtown was a center for nightly entertainment in Miami, comparable to Miami Beach, at its height post-World War II in the 1940s and 1950s. The area served as a place of rest and refuge for black mainstream entertainers such as Count Basie, Ella Fitzgerald, Cab Calloway, Josephine Baker, Billie Holiday, and Nat King Cole who were not allowed to lodge at prominent venues where they performed like the Fontainebleau and the Eden Roc, where Overtown hotels like the Mary Elizabeth Hotel furnished to their needs. Further, many prominent black luminaries like W. E. B. Du Bois, Zora Neale Hurston, Joe Louis and Jackie Robinson lodged and entertained in the neighborhood.

The area experienced serious economic decline from the late 1950s. Issues ranging from urban renewal to the construction of interstate highways like I-95 (then, the North-South Expressway), the Dolphin Expressway and the Midtown Interchange in the 1960s, fragmented the-once thriving center with the resident population decimated by nearly 80 percent from roughly 50,000 to just over 10,000. The area became economically destitute and considered a "ghetto" as businesses closed and productivity stagnated in the neighborhood.

Development was spurred in the area again in the late 1980s with the construction and completion of the Miami Arena and transit-oriented development surrounding the newly opened Overtown station.

Since the 1990s and 2000s (decade), community gardens have been created, in addition to renovations to the historic Lyric Theatre and revitalization and gentrification efforts spurred both by the city of Miami and Miami-Dade County. Dr. Marvin Dunn[1] founded the original Roots in the City Overtown Community Garden, turning an "overgrown, littered lot into a flourishing garden" maintained by Overtown residents and volunteers. Roots in the City, a non-profit "dedicated to community development, jobs training, inner-city beautification, healthy eating initiatives, and community research" used the Community Gardens provide affordable fresh produce to low-income families, public school students, community agencies and homeless shelters. and is also organizes an urban farmer's market. These projects and other aspects of Overtown were featured in a short documentary The Ground under Overtown[2] centered on a multi-issue multi-racial community organizing created around Florida protests against the FTAA with focused on environmental racism, critiques of so-called "Free trade" agreements like the FTAA, and positive communitiy solutions such as permaculture. Anti-FTAA protesters at Dr. Dunn's invitation held a workshop on permaculture at the Overtown Community Garden and donated over 100 cherry trees to the Overtown community.

In 2015, David Beckham announced that he had secured land in the neighborhood for a future Major League Soccer expansion franchise in Miami. The stadium will not be finished until 2018 at the earliest. 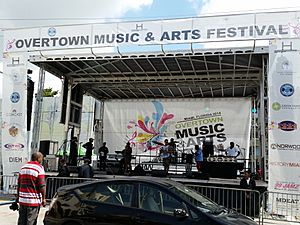 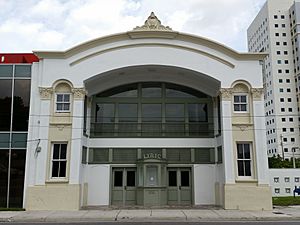 Overtown is home to several historic churches and landmarks listed in the National Register of Historic Places, including:

Other places of interest included in the City of Miami Historic Preservation Program are: 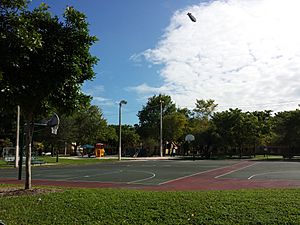 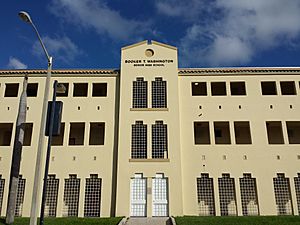 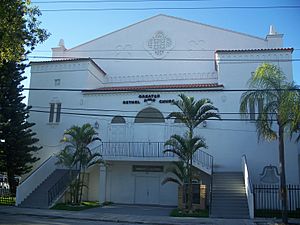 In addition to the churches listed in the places of interest section, in the neighborhood there are: 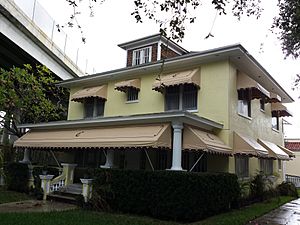 Overtown is served by the Miami Metrorail at:

All content from Kiddle encyclopedia articles (including the article images and facts) can be freely used under Attribution-ShareAlike license, unless stated otherwise. Cite this article:
Overtown (Miami) Facts for Kids. Kiddle Encyclopedia.